"You can't have too many Dirt Pedals."
This one is loosely based on the Krank Distortus Maximus. The DM is basically an LPB driving an LM386 with a Marshall TMB stack at the end. The LM386 is largely responsible for the sound. The DM is a great sounding pedal in stock form, but I saw an opportunity for some improvements. The 1st stage is now a Sziklai pair, using a JFET & a Si PNP. It has a higher input impedance and more gain. I changed the way the GAIN control is implemented for easier adjustment and lower noise. I added a bass cut switch (FAT) up front and a treble cut switch (BRITE) between stages. I stuck a 3-way gain switch (CRUSH) on the LM386. Lastly, I rescaled the impedances in the TMB stack to take full advantage of the LM386's drive capabilities and switched it to a Fender-style tone stack to increase the available Bass boost. The higher input impedance and lower output impedance enables this pedal to stack well with other pedals.

I'm digging the sound. With CRUSH at max and the FAT and BRITE switches off, it sounds like a DM. Chords hold together pretty well. Turn the FAT switch on and it's a BEAST. Either way, there's plenty of sustain and it's great for feedback. Has a great chunk sound when I dig in with the pick. Lots of bass available at low to moderate GAIN settings. Bumping up C3 and C8 will extend the bass response at higher GAIN settings. There is a provision for driving a back-to-back pair of red LEDs for the magic-eye effect, that's the red wire at the bottom that goes nowhere. Tried 'em out on the breadboard, but have not yet installed them on the boxed-up unit.

As a nod to Krank, I retained a Roman-style name, but changed it to one of the characters in Monty Python's Life of Brian: Biggus Dickus. 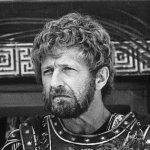 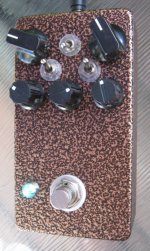 It's not nearly as pretty inside as one of HamishR's boxes. There's some clear heat-shrink on the power jack terminals and LED leads. 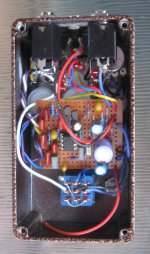 Here's the fit check, before wiring it all up. Those three switches were a pretty tight squeeze. 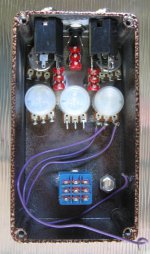 Here's the board with enough wires for an aliveness check. I managed to not muck anything up this time and it worked right out of the chute. The final verision has a JRC NJM386 in place of the TI LM386. 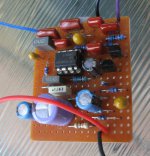 It looks great! I really dig the layout on the prototype boards! I’ve done a few of them and they are not as easy to do as it looks! So Bravo! 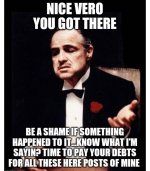 Ooo sweet Chuck! Another layout to toy with!

Madman gets 7 controls in top half of 125b. Bananas.
This looks like a fun one! 386 can really bring the nasty.

Pretty amazing how a component designed for one function can work so well doing something else. For anyone else building one of these, all component values are negotiable. 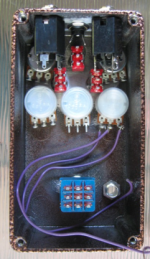 It's really a quiet and subtle effect you got.

One star, not recommended.

Thinking about this some more and that input stage would be pretty sweet for a Muff.

Has more gain than the usual BMP input stage. Like the Mas Malo, the 1st-stage gain could be adjustable.

Chuck D. Bones said:
Has more gain than the usual BMP input stage. Like the Mas Malo, the 1st-stage gain could be adjustable.
Click to expand...

I love it. Now I want to remake all the dirts with it. Good stuff!

Thanks for sharing this, I've never built anything on vero, but i've got a few in stock and might have to give this a go

Here's my layout. Red X's represent cuts. IC1-8 is not connected on the board, but is connected inside the IC. That's why there is a cut under that pin. Use my board pic (above) as an assembly guide. R2 & C16 aren't used. R13 & C15 are for the Magic Eye LEDs: a back-to-back pair of red super-brights with the other end connected to ground. You can omit R13 & C15 if you don't hook up those two LEDs. GND is 2 columns wide above IC1; bend one of the leads on C6 over on the solder side to bridge the two columns. Polarized caps have the line at the - side. C7 & C17 are a snug fit, mine kinda sit on top of the parts next to them. C14 can be 100uF or larger; I ended up using 220uF. Size Rled for the desired brightness. Q1 can be any JFET with Vp around -1V; pinout is D-S-G. Pots and offboard wiring are per the schematic. There are five GROUND connections, use as many as you like. 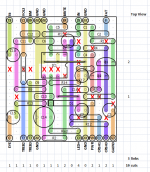 I think you'd either have to stagger the pots or use 9mm.

Another Banger! Great stuff so interesting to see and learn from, thanks man!
P

If we want Marshall TMB, value still same? Did perf-ing 1590B.
Thank you, spark to try and build still present.