This time we'll focus on the Fuzz Face. The Fuzz Face has a long and colorful history that is beyond the scope of this discussion. The original FFs were built with PNP Germanium transistors because that's what the pedal builders had to work with. In this discussion, I'll talk about NPN transistors. It's simpler that way because all of the voltages are positive and we don't have to stand on our heads when we look at the schematics. All the same principles apply with PNP or NPN, Germanium or Silicon. I'll start off with Si because we don't have to concern ourselves with leakage. Later in the discussion, we'll take leakage into account. 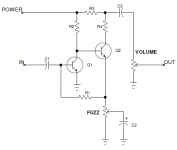 So what exactly do we mean when we talk about biasing a Fuzz Face? Usually, we're measuring or setting the DC voltage on Q2's collector. But the DC bias affects both transistors, so in the broader sense, we mean the collector currents of both transistors and the emitter and collector voltages on Q2.
For the purposes of evaluating the DC bias, we will treat all three capacitors as open circuits since they block DC. There is a DC feedback loop from Q1's collector to Q2's base and then back to Q1's base thru R1. It's a negative feedback loop because there are an odd number of inversions as we go around the loop. In other words, if something makes Q2's collector current go up, then Q2's emitter voltage rises. A rise in Q2's emitter voltage increases the current thru R1 into Q1's base. This makes Q1's collector voltage drop, which is the same a Q2's base voltage. Lowering Q2's base voltage reduces Q2's collector current, restoring the bias point. With me so far? Good.

Most of the time, we pick a bias point where neither transistor is cut-off or saturated (more on that later). This is important because the feedback loop only works as long as both transistors are operating in a linear region. Now let's analyze the transistor voltages & current. Engineers are both clever & lazy; we try to simplify analysis tasks whenever possible. We'll start out by assuming that Q1 and Q2's base currents are very small, almost zero. If Q1 and Q2 have hFE of 100 or more, then the error caused by this assumption is small. Later on we'll go back and account for base current for the cases where the transistors have low hFE and/or leakage.

So what do we do with all of this information? We can look at it qualitatively and see that hFE definitely makes a difference in the bias point. We can also see that if we're willing to tweak one or two resistors, we can use pretty much any hFE we like.

I mentioned leakage at the beginning of this discussion, so let's look at that. Leakage in a Ge transistor behaves like there is an extra resistor connected between base & collector. That resistor injects additional current into the base which affects the bias. Leakage in Q2 doesn't have much effect because Q1 will drain away the excess current thru it's collector. It affects the overall bias point, but not much. Leakage in Q1 is a whole different story because the only place for excess base current to go is backwards thru R1. The feedback loop will lower Q2's emitter voltage in an effort to reduce Q1's base current. Let's look at some numbers. Suppose that Q1 has hFE = 50, like before, but now Iceo (collector leakage current) = 300μA. Iceo is the collector current with no external base current. All of the base current is from collector-base leakage. That means the internal base leakage current is Iceo / hFE = 6μA. That's 6μA that doesn't have to come from R1, so R1's current just went down from 6.6μA to 0.6μA. Holy Shit Batman, that an 11x reduction! As a result, the voltage across R1 goes to down to 60mV (from 660mV) and Q2's emitter voltage goes down to 710mV (from 1.334V). You can see the ripple effect. The leakage in Q1 has caused Q2's collector current to be about half what it was when Q1 had no leakage. This example illustrates that 300μA leakage in Q1 is close to the upper bound of what would be acceptable in this circuit. Another take-away is that since leakage is very temperature sensitive, using a leaky Ge transistor for Q1 can cause a Fuzz Face to malfunction when exposed to the high temperatures from stage lighting. Hybrid FF circuits like we see in the Skreddy Screw Driver use a high-gain Si tranny for Q1 and a Ge tranny for Q2. We get the Germanium tone and the stability of Silicon.

One last thing: Gating. Through this entire discussion we've kept Q1 and Q2 in the linear region. What happens if we deliberately (or otherwise) skew the bias point so that Q2 saturates? Two things happen: the feedback loop is broken and Q2's gain approaches zero. The precipitous drop in Q2's gain kills the guitar signal and we have gating. If we put enough guitar signal in, that signal will drive Q2 out of saturation and back into the linear region. As the guitar signal decays, Q2 slips back into saturation and the output signal cuts off. That ripping velcro tone is saturation setting in. Gating can be achieved simply by raising R3 or R4 until Q2 saturates. We could also fiddle with R1, which is how the Woolly Mammoth does it, or vary R3 and Rf, which is how the Fuzz Factory does it. It all comes down to pushing the bias point to the extreme.
Last edited: Mar 31, 2021

Thank you so much for this sir!

The only way I will understand these calculations is to apply them in actual scenarios complete with live variables.

I'm here, again. Does "operating in the linear region" make it a quiescent amp (Class A)?

(just don't hit me with excessive negative feedback, or you'll saturate my transistor and throw the collector current all out of whack)

Not sure what you mean by "quiescent amp." In a single-ended circuit, "linear" and "class A" mean pretty much the same thing. The definition of Class A operation in a BJT is that the collector current never goes to zero. Any class A amplifier, when driven hard enough, will leave the Class A region and cutoff (Ic approaches zero) for part of the cycle.