The Bontempo is a Tap Tempo & Modulation solution for PT2399 delay. Acheive extremely precise tempo with the 6 tempo divisions available. You can create complex soundscapes with the 6 modulation waveforms.
electric-canary.com

Anyone seen this? I've been eyeing it for away, Electric Canary just listed it for sale a few days ago. Looks to be more promising (and cheaper) than the TapTation because you can calibrate the Bontempo, have seen all over the nets that the TT is notoriously imprecise. Modulation and presets, too!

I ordered a couple of them. I have a few Seabed and other PT2399 PCB's around, whenever they arrive I'll give it a go and report back. Looks very cool!

The lack of filtering on the power line seems like an oversight. You'd want a 47uf+ to gnd on the 5v line coming out the regulator to remove noise that plagues 2399 circuits.

I'm intrigued about the modulation though.
R

Got a BonTempo assembled with PedalPCB's Seabed Delay. This thing is very cool! Built in subdivisions, modulation, blinky LED. Super accurate timing wise, which seems to be the common complaint about TapTation (and this is a lot cheaper). Highly recommend this little project to anyone looking to "easily" incorporate tap tempo and other cool stuff into their PT2399 builds!

I put the mod depth knob on the exterior with rate on the inside via the trim pot. As with all PT2399s, it gets a little noisy and distorted at really long delay times but most of range sounds quite nice! You can program it to limit at 600ms delay time which I may do.

Calibrating the digital pot took some time, went the extra step and measured time with my DAW so timing is +/- 1% accurate. I used a scrap enclosure so there are also sorts of extra holes and overall messy. Now to find time to get it into a nicer enclosure and recording a quick demo! 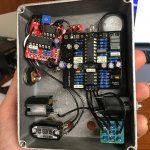