It's been a while since I've done a tutorial. Today I wanted to do a quick tutorial on a more recent and simple PCB: Crankshaft Distortion. Let's get started. Here is the schematic. As of today the build doc is not available yet, but this schematic comes from Mr. PedalPCB himself.

As you can see this circuit uses a single transistor into a pair of asymmetrical hard clipping diodes. It has one knob only for more gain (MORE in the schematic). I like this circuit given the amount of parts here. I think it has less parts than an Electra Distortion, but not 100% right now.

Let's get our power setup and the layout in our head. One note here: I did not realize until after I took this pic and finished the circuit that there should be NO RESISTOR before going into the power supply. This is a mistake on my part since I whipped this up from another layout of the circuit I found elsewhere.

9v to red power rail and ground to ground rail. Insert a 100u cap across the power rails. I then placed the 2n3904 on the board to give me an idea of how to build from here.

The way I am building this one is not from left to right when reading a schematic. Since this is only 1 transistor I'm tackling it by starting at the collector side. A 10k resistor from power to collector, a 2.2m feedback resistor going from collector to base, and a 68n cap coming out of the collector. 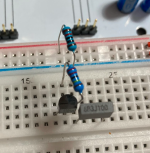 Now working right to left, I added a jumper out of the base pin in the transistor and into the 100n cap (C1). I'm also starting on the emitter side of this circuit by adding the 330 ohm resistor. The other parts of the emitter chain will be done shortly. 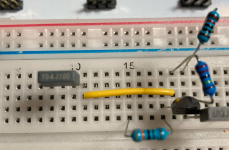 Ok. Now let's finish everything except the diodes. Your signal input should go to the left pin of the 100n cap. Also add a 1m resistor to ground (R1) at this point as well. Let's wrap up the emitter chain I talked about above. You'll need to hookup the 5k pot and the additional 100u cap. Pin 3 (blue wire) is coming out of the 330 ohm resistor (horizontal one below), pin 1 (orange) goes to ground and you can plug it in anywhere on the power rails. Pin 2 (white) goes into the positive end of the 100u cap (shown on the right hand side of the below pic) and the negative end goes to ground. This is pot and electrolytic capacitor combo out of the emitter is identical in topology to a Fuzz Face (the more you know ) 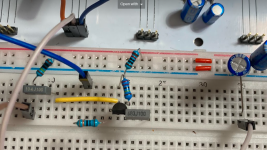 Ok, now for the diodes to finish off this simple circuit. The schematic calls for 1n60p which I don't have on me at the moment. Instead I used BAT46 since they are relatively similar in voltage drop. They are arranged in an asymmetrical orientation, meaning two go in one direction and another diode goes the other way. You can plug your output wire and the diodes right after the 68n cap as shown below. I put the singular diode going straight to ground at the negative end. The other pair of diodes I need a bit more room to make work, so I ran one horizontally out of the collector cap and then the other in the same polarity direction going to ground on the positive end. 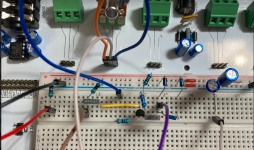 And there you have it! nice and simple, huh?

You can try tweaking the values of R3 to adjust the bias and see how that works out.

You can also adjust C3 to your taste as well. The larger the value the more bass will come through and vice versa.

Since you're breadboarding this I would try adding a tone filter or tone stack afterwards and see how you like it. Refer to the LPB-1 and Pedalblock Tone Control posts to help get you started on that.

This is a nice little tutorial! Strangely enough, been looking for a simple project to get started with breadboarding. Think this will fit the bill quite nicely.
S