Staff member
I'm working on a small adapter PCB for the FV-1 to allow toggling between two EEPROMs on a toggle switch.

both approaches seem reasonable. option 2 probably lets the toggle switch fit in some tighter spots on a pedal.

Tough call. Can't decide, but will be a great option!

Staff member
Well.... if it's a tie then I reckon we'll just have to do both.
I

Any updates on this one? Just ordered my second EEPROM and would love to just be able to switch between it and the original one!
I

Whichever choice, make sure to leave enough vertical space for an 8pin dip socket on one side (or both), so we can swap eeprom chips as you make new sounds available.

I'm certain I'm not the only person who sockets their eeprom chips here ?
I

I'd say option two, because when you use I2C (SDA, SCL) between two chips, it's best practice to keep all connections as short as possible, and not to run the 2-wire signal through physical disconnects; sockets introduce problems, as do separate ground planes.

Even at the protocol's lowest speeds, keep conductive interconnects short to avoid reflection errors in the data stream (which I'm not sure the FV-1 can recover from gracefully as it loads programs) and to avoid putting high frequency noise near the op amps, which may cause gain overload (oscillation) at inaudible frequencies, and mess with the sound of the guitar.

I'd suggest trying it both ways but with an oscilloscope set to about 200uS on your audio signal to check for stray RF from the scl/sda pair, which you might twist several times to cancel reflections, unless you go with shielded cable.

I'm not being a know-it-all ... I'm humbly sharing what I've learned about mixing I2C and audio within a music project. I use arduino chips to control FV-1s in my personal projects, which use an sda/scl pair from a rotary encoder to choose which effect on my Arachnid board to engage, and another sda/scl pair to send that effect name to a display. I have a box of "mistakes" PCBs to back up the above suggestions about signal quality, data paths, and shielding with this signal combination.

If both are possible with the option to do either, that would be my choice. If it comes down to only one of the two, then I would opt for #1. It seems sturdier than a PCB daughterboard plugged into an 8-pin DIP socket.

But then option #2 offers the potential for a slightly larger PCB daughterboard with 4 EEPROMs on it in the near(er) future. Still, I'm good with #1 if it's one or the other.
D

Should I save some space in my current FV-1 build for a EEPROM switcher?
I

Devoureddeth said:
Should I save some space in my current FV-1 build for a EEPROM switcher?
Click to expand...

THAT is a VERY important question !

What are the dimensions of the switch-mounted eeprom board ? Must it occupy space near the stomp switch where there is no PCB above it ?

What is the height of the socket-mounted onboard assembly ? What keeps it firmly mounted to the DIP-8 socket ?

PPCB Administrator, can you share the (projected) sizes of these items so we can consider drilling and layout for the extra switch ?

(with many thanks to PPCB for making this item)
S

Oh man, just Seen this thread. This would make things so much easier 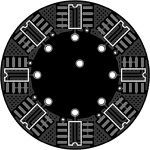 Does this mean up to 64 programs?!

TBH, while intriguing and quite the ideal solution for up to 64 different programs in one pedal, there are two primary concerns . . . .

Also, it would require two 8-way rotary switches and a very large enclosure just to have room for the algorithm mapping. Or perhaps an Arduino solution to add a footswitch matrix for accessing from the different algorithms.

Still, a slick solution if someone wanted to go there.
Z