I’ve been wanting a true Univibe type pedal for some time. Finally bit the bullet and got a sweet deal on Reverb.


https://www.ehx.com/products/good-vibes/
I went with the EHX Expression Pedal as well:

It’s still on its way.

I’m in the process of putting together my first real pedal board. In the past, I simply plugged into a few things here and there but now I’m putting together a bunch of devices. Kind of my wish list pedals.

Right now the signal chain will be:

The Wah, Mk II, and Muff will be DIY pedals. I’ve been working on MK II pedals for some time. I have built a few for others but have been waiting to make myself one. May end up using Pedal PCB boards for the MK II and Muff.

I already own the SD-1, Good Vibes, Surf Trem and Drip.

The Strymon is a big departure for me as it’s very expensive but I’m still not sure about it. Of all the big multi-delays with presets, it’s by far the most comprehensive.

I’ll report on the good vibes when it comes in.

Control layout is classic UniVibe and expression control can be switched from speed to intensity. The control you assign to the footswitch has to be fully on to get the full sweep of the pot range.

Volume has to be pretty close to full for unity on the effect when disengaged.

So far I’m really happy with it and it will serve the board well as the sole chorus and UniVibe type pedal.

Ran through some Pink Floyd tones tonight. You have to keep the intensity way down but there are very authentic UniVibe tones in here.

I’ve been keeping the expression pedal on speed and it works great.

Had the chance to adjust the internal bias trimpot last night and WOW! Really opens this thing up. It has more intensity and “throb” now.

This really is a fantastic pedal and I think many of the bad reviews are from people who did not take the time to adjust the bias to taste.

Big Monk said:
Had the chance to adjust the internal bias trimpot last night and WOW! Really opens this thing up. It has more intensity and “throb” now.

This really is a fantastic pedal and I think many of the bad reviews are from people who did not take the time to adjust the bias to taste.
Click to expand...

If the electrovibe doesn’t kick the good vibes off your board, an OBNE expression ramper may be your friend since you’ll be able to set two different speeds and then toggle between them with ramping. Only 1590A sized, so combined with the good vibes, it’ll take up roughly the same size as the electrovibe

Si I reached out to EHX last night to see if they had any recommendations or procedures for how they set the internal bias for the Good Vibes. They sent me their QA document from the factory and I reset the pedal to stock.

It sounds awesome. I think the previous owner had tinkered with it and the bias was WAY down. I then tweaked it a bit closer to stock on my own without knowing.

Now I just needed to get my Electrovibe tweaked right and I'll be on my way!

Nice that's pretty decent customer service. Did you get a Volante in the end? If so how are you getting on with it?

SillyOctpuss said:
Nice that's pretty decent customer service. Did you get a Volante in the end? If so how are you getting on with it?
Click to expand...

No Volante for me. I contemplated the Boonar but then found the Hydra, which is on my list.

Big Monk said:
No Volante for me. I contemplated the Boonar but then found the Hydra, which is on my list.
Click to expand...

Ah no problem. I'm interested in the volante so just wanted to see if you had got one and what you thought.

After reviewing and changing the bias per the EHX build document, I found that after playing for a bit, the bias would drift and even with the pot maxed out I could not reach the vDC from their QC doc (3.84-3.86 vDC).

I sent a follow up to EHX and they said they experience this from time to time as well and typically just max the pot out. So, I inquired as to whether a larger trimpot would work, and while they said it would, R41, a 220k SMD resistor, could also be reduced.

I popped the lid and saw the trimpot was a Taiwanese knockout of the Piher/Amphenol brand and found a 20k on Digikey. Popped it in today and now have adjustment above 4 vDC possible, although I imagine that will make the intensity too strong at higher settings.

Cool thing is that we now know that the 10k trimpot and 220k R41 form the bias network. 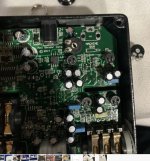 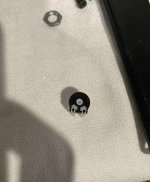 Well, I've decided I'm going to try and move the Good Vibes. It's a cool pedal but I've found that the tones i like from it can be had by layering in my Script Phase 90 with my Electrovibe to make the EV a bit brighter and swooshier.

Furthermore, I believe I'm going to sell my Electrovibe when the new single speed 125B version comes out. I love the organic swirl of the Electrovibe but I don't think I need dedicated dual speeds.

Also, when I do my XC Phase, I'm putting the Univibe mods in and selling my Script Phase 90.

I’ve changed my mind yet again.