When I heard about the Fingers and Wilhelm Scream overdrives I knew that I wanted to play with them...especially since they're PedalPCB originals. I've built a number of TS-based overdrives with the Greengage (EQD Plumes) being my current favorite. All of the TS-based clones I've built (Ibanez TS808, Ibanez TS-9, JHS Moonshine v2, Way Huge Green Rhino MKII, KHDK Ghoul Jr) have all been quite similar in tone but vary in terms of how they approach tone shaping as well as the amount of gain, compression, and clipping. The Greengage was one of the few that bucked this trend to a good degree and thus became my favorite TS pedal. So the question I had was whether any of these newer TS-based pedals would top the Greengage. Or would they stand out on their own as another TS flavor?

Straight-up...in terms of sound, I think you'll find that they pretty much sound like a Tube Screamer...but a bit better? They're not as bright as a Greengage/Plumes. A bit more mellow. Still has a bit of a mid-hump...but it doesn't seem like it's as prominent as a typical TS....which I suppose is a good thing.

The Fingers and Wilhelm are quite similar to one another...however, there are some differences. The Fingers has Bass and Treble controls as well as four clipping diodes in a symmetrical configuration. Whereas the Wilhelm has a single tone knob and two clipping diodes. One of the bigger differences with the Wilhelm is that it includes input and output buffers bringing it closer to the same configuration as the original Tube Screamer circuit.

Unity gain between the two isn't quite the same. You have to boost the Wilhelm a bit more. Not sure if this is due to the clipping, the buffers, or both. Regardless, it's not really much of an issues. Still plenty of volume in the Wilhelm...it's just the the Fingers has more and thus might be good as a boost (much like the original TS).

Between the two, if I had to pick one I'd probably go with the Fingers. I just feel like I can get more out of it with the tone controls. The differences in attack and compression are pretty subtle in my opinion and the added volume of the Fingers can help in certain situations.

Now we get to the Honeysuckle, which is closer to a more traditional TS circuit in that it uses an op-amp rather than transistors for the clipping and tone stages. In fact, it's more or less a straight-up TS circuit with some updates to the clipping and tone stages. A Bold switch is added which basically adds a germanium diode to the MA150 diodes for an asymmetrical configuration. It doesn't seem to change the attack really but does seem to effect the tone by giving it more of a mid boost. There's also a Bold switch that switches between two different resistor/capacitor combos. When engaged, you get more lows and highs added.

So, how does the Honeysuckle do agains the Fingers? Strangely enough, they're still a lot alike. With everything at neutral, like the Wilhelm, they sound virtually identical (with a small reduction in the bass on the Fingers of course). What surprised me was that I could match just about every tone setting on the Honeysuckle with the Fingers. Again, differences in clipping and attack are there...but still relatively subtle and depends on the guitar and amp you use. In the end, I tend to favor the Fingers over the others just for the simple fact that I can dial in tones a bit easier with it and get more volume out of it too.

The main application that I found it works great on is boosting a Marshall. With a bit lower gain on a Marshall Plexi model, when I added the Fingers (or any of the others) it really added something special to it. A Plexi at more high gain sounds great...but set it lower and let the Fingers do more of the driving and, man, you get a completely different character. It's like the "brown" sound but kind of cooler. Really dig it! 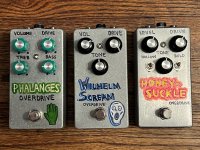 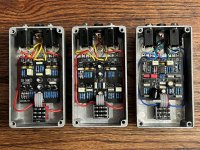 What do you use to draw? Sharpies? Pasco? Something else?

spi said:
What do you use to draw? Sharpies? Pasco? Something else?
Click to expand...

Blood and sweat with different shades of food coloring.

Nah, I'm just teasing! I use Sharpies and then spray a bit of semi-gloss clear coat on the enclosures.

I'm hoping to migrate to a more modern solution: a laser engraver! Figure I can design some things that can be burned right into a powder-coated enclosure or onto faceplates. In the meantime, I have a batch that I'm just gonna add printed labels to.

I built the Fingers and I effing love it. Funny you mention rolling back the bass, I do the same thing. It's got a nice clarity to it.

Why change the artwork? That is looking really cool, great work and i love the write up

jjjimi84 said:
Why change the artwork? That is looking really cool, great work and i love the write up
Click to expand...

Oh I’m not changing the artwork. I’m just thinking of a new approach for future stuff.

Good work, thanks for the write up and especially regarding the Wilhelm.

The more I resist it, the more inevitable I'll have YAYATS... Wilget Wilhelm.