Fly me to the Moonn

There are way too many good looking pedals being posted. Here's something mediocre to balance it out 😛.

I bought a number of pcbs from Moonn Electronics after seeing a thread from @Mentaltossflycoon showing off his Tim Escobedo Ugly Face.

My order arrived to me some 10 weeks after I placed it. At that point I completely forgot what I bought. AI also don't remember looking too closely at what I was getting either.

It came as a pleasant surprise as I bought pcbs based on the Echo Dream 2 and Reverberation Machine. Of course I had to put the two together in a single build.


I have not spent much time playing with it but there are a lot of crazy sounds in there. 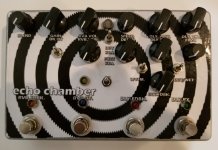 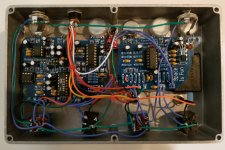 Guardians of the analog

That is a wild build, looks like a fun noisemaker. Look good, nice keeping all those wires neat!

I was just usin' the kids' slang these days, "unit", and then "Moonn" and it's the sorta thing that might be cooked up in the kitchen at Muffin Labs...

ANYWAY...
Your big builds always inspire me to aspire to think out of the small box ...

Feral Feline said:
I was just usin' the kids' slang these days, "unit", and then "Moonn" and it's the sorta thing that might be cooked up in the kitchen at Muffin Labs...

ANYWAY...
Your big builds always inspire me to aspire to think out of the small box ...
Click to expand...

I think the slang was used by kids but maybe off by a decade or three? Frank Zappa named his daughter Moon Unit and that was way before my time. Moon Unit would be a good name for a pedal.

Sure, the Valley talk is old, but Cleatus McFarland and all his pals use the term "Unit" all the time, or at least up to last year.

You have correctly ascertained the Moon Unit ref, which is not before my time, I heard it on the radio a lot.

Wow! Somehow I never saw this video back in the day. There's another one where a young Miss Zappa is lip-syncing while '80s-bouffants in leotards and legwarmers dance in the background. There were a lot of great things about the '80s, and other things not so great.
What I never realised before, having only heard it on the radio, is that the bass line and bass tone is KILLER Grinding!

There's a current yootoober vid of her weighing in on her and her dad's hit, but I've not watched it.


My only regret is I didn't listen to the original cut before posting, if I'd refreshed I'd have used "BITCHIN'" instead of "radical". 🤷‍♂️

Awesome build, fer sure, do a yootubular demo vid, that'd be Farrrrout! 💅

I have this exact multi in my queue after I finished up these last few envelope filters.

Looks awesome!
You must log in or register to reply here.

DEMO One for the grandpa guitars.