Is anyone using the Arduino IDE with Seed/Terrarium?

The convos I've seen so far seem to relate to using libDaisy directly. I have been using the DaisyDuino examples with the Seed (not stuck onto a Terrarium) and they have generally worked, albeit without any input control (and that's likely because I have configure hardware on a breadboard incorrectly).

It might be more clear to say that I am using 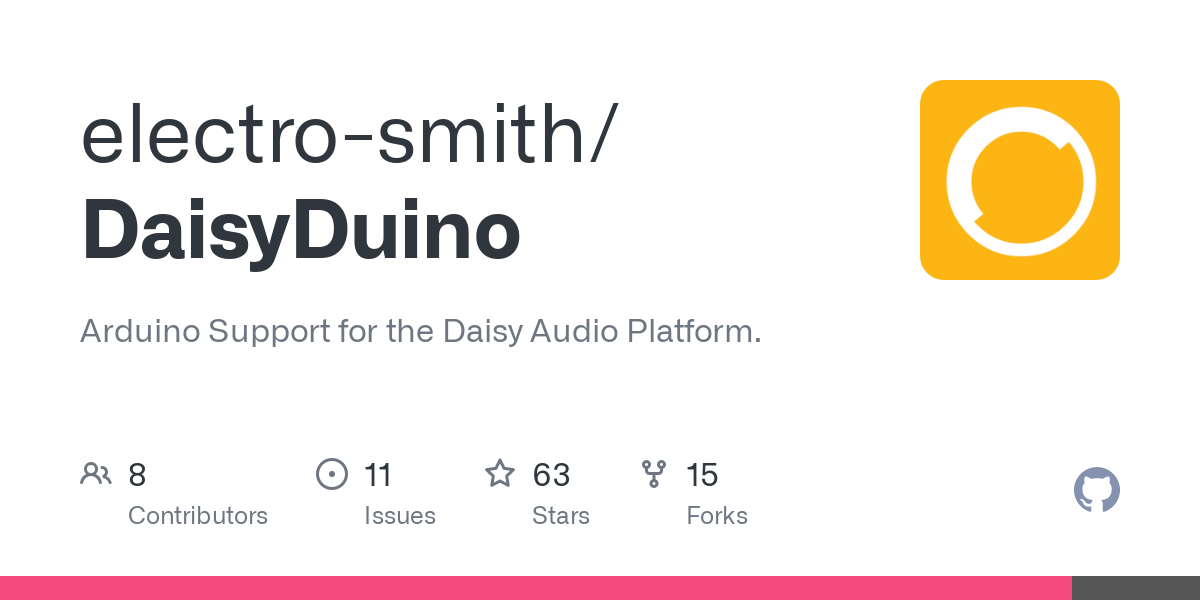 Arduino Support for the Daisy Audio Platform. Contribute to electro-smith/DaisyDuino development by creating an account on GitHub.

I used it when I first got my Seed to try it out.

I used it from the time the Daisy Seed first started shipping until about a month ago. There was nothing wrong with the Arduino environment as I also used it with an ESP8266 that I had integrated with the Daisy Seed using SPI into a guitar amplifier project that I had recently completed. The only drawback with the Arduino environment is that it doesn't allow concurrent programming of 2 different boards. I was repeatedly changing board types back and forth between the Daisy Seed and ESP82666 in order to compile programs. I found a solution for this by switching to Visual Studio 2019 Community version and downloading Virtual Micro Ware extension for VS2019. Several features were very attractive to me. Primarily this combination of IDE with extension allows one to concurrently program and compile more than one dissimilar board. Secondarily it makes some very powerful VS tools available such as Intellisense and Code Completion. VM Ware costs $12US /yr after a 30 day trial, but to me, its worth every penny.

You had a requirement i wouldn't have thought of and it's quite salient. You meant this?

I started as an Arduino noob, and using the IDE was useful to get my bearings. I have drifted from it as i need to use workflows that don't include it, including Pd and invoking the GNU toolchain through Make or build scripts. As caveated in my original post, any specific problems i had should not be attributed to the IDE.

Oh yes, I indeed meant it! I'm a retired code monkey (actually a Process Control Engineer) that started out in the 70's with a Radio Shack TRS-80 when they first became available. I would program assembly language code using Line Editor and Assembler (referred to as EDTASM) and quickly graduated to BASIC. As time went by my career in industrial controls made the eventual switch from analog to a hybrid mix of analog and digital controls and converters as the need for process data became increasingly important to management. I entered the Microsoft environment with Visual Basic 2.0 and graduated through all versions even as it was switched from a stand alone product to Visual Studio. In 2006 I was contracting with a steel company for a year when my client insisted that I rewrite a new application that I had just finished, this time using C#. I didn't realize at the time that he did me a huge favor as the market for VB programmers had literally vanished over that past year. Anyway, after about 2 weeks of panicky Googling my angst subsided and I started to feel more comfortable with C# and I began to appreciate the speed, power, and brevity of the code. I obviously prefer the MS environment as I have used it throughout my career. I used VS2019 with VisualGDB for a month but can't afford a Benjamin for a copy. I'm aware of a free solution that uses VS Code I hesitate to use it because of problems I've encountered in the recent past with it. I like the VM Ware extension and what it brings to the table. I forgot to mention that I use an ST-3 Mini Link to program the Daisy Seed and the VM Ware accommodates DSW mode and works wonderfully for troubleshooting with break points and trace points.

TGargasz said:
I found a solution for this by switching to Visual Studio 2019 Community version and downloading Virtual Micro Ware extension for VS2019.
Click to expand...

I have an upcoming project that will be Arduino-powered (not Daisy related) and was really dreading using the Arduino IDE... I just installed Visual Micro, and man, this is exactly what I was hoping for.

Just the project file organization (and the ability to properly use multiple source files / headers) is worth the price.

I've only played around with it for a few minutes and don't have an Arduino board nearby... does this allow you to "live watch" variables while the program is running?

Yes it does! It's a bit of a pain to get it set up and working the first time. Don't skip the tutorial on debugging. You'll be glad you spent the time going through it. I had trouble getting break points working at first. I finally broke down and went through the tutorial and found out that what I was attempting to do would only work with the Debug version of my project and not the Release version.
You must log in or register to reply here.

TUTORIAL What is a Breadboard and Why Do I Need One?
2