Played one the other day and it sounds nice (yet maybe not worth the price tag sort of nice) but also not unlike a more polished Rat. Haven't seen any gutshots thus far though. Form factor of the builder's effects is not exactly great for pedalboard space either.

If anyone has at least some gutshots to sort of figure out what this is, I'd be happy to see that as well!
Upvote 0
J 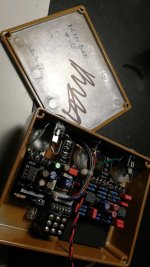 So here it is. It doesn't seem to be a rat, it has 2 dual op amps with the markings sanded off because f*ck me right? Also has an LT1054 charge pump that goes to ~25V. None of the op amp stages appear to be buffers and all the clipping diodes seem to be hard clipping.

In terms of tones I didn't have time to shoot it out against my medium to high gain pedals, but it sounds rather nice. Without comparisons more organic and amp like than a rat for sure. Which is nice because I feared I'd be buying yet another modified rat.