Try the SWTC (Stupidly Wonderful Tone Control) or one of its variants — basically it'll help clean up the high fizz generated... 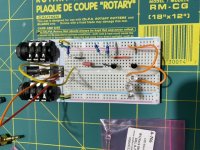 Paradox916 said:
Not a pedal but a fun little project made possible by the infamous @fig a signal trigger that will be incorporated into a few builds I have plannedView attachment 15810

LED's blink when signal goes through them?

BuddytheReow said:
LED's blink when signal goes through them?
Click to expand...

If I understand It correctly. I believe the guitar signal is triggering the transistor to complete the circuit to the LEDs

Paradox916 said:
If I understand It correctly. I believe the guitar signal is triggering the transistor to complete the circuit to the LEDs
Click to expand...

If true, It would do it regardless of your understanding. -Bill's Law.

Everything is on the ground side so I don’t believe the guitar signal goes through the LEDs at all....you know what I meant

Is that basically a Schmitt trigger circuit?

benny_profane said:
Is that basically a Schmitt trigger circuit?
Click to expand...

I’m not sure to be honest... It seems similar the Schmitt trigger( I had to look that up) is a little more fancy and well thought out than my bastardized creation.

From breadboard to prototype V.1 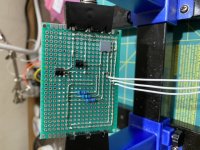 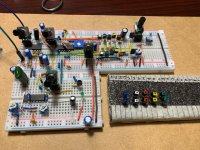 The transistor ladder core is based on the Kassutronics Ladder Filter, and this filter sounds amazing! It's a 24dB voltage-controlled lowpass filter, so the frequency drops off much more steeply than filters you commonly see in pedals. The cutoff frequency can be controlled with either a knob or a control voltage input (more on that later). The resonance control is currently uncompensated, so it will cut low frequencies and volume as you turn it up. I've seen a few ways of improving that, but haven't had a chance to try them yet. Note the schematics shows both through-hole & SMD symbols, but you only need choose one. 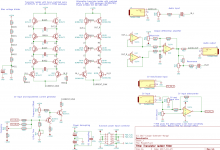 The transistors & capacitors for the ladder portion of the circuit must be tightly matched in order to sound right, so I hand-tested 50 transistors and picked out the best pairs. It's super time consuming, and you can't touch the transistors with your fingers as the temperature will wreak havoc on your measurements. If I do a PCB, I'll probably go with SMD matched transistor pairs.

The Kassutronics version of the ladder filter has a neat little circuit block on the CV input, called an "attenuverter" - an inverting attenuator. It takes a control voltage (0-5V DC) and lets you to control both the amount of CV & the polarity with just one knob. This means that an envelope can switch from opening or closing the filter with just the flick of a knob. I'm surprised we don't see this on many pedals as it's one of the best bang-for-your-buck building blocks I've seen, with only 4 components: 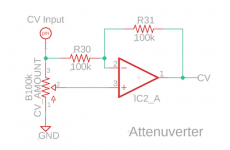 It receives control voltage from a pretty simple envelope follower I built, with adjustable attack & release time controls. Both the filter & the envelope follower receive signal from a super high gain Hi-Z input stage, which boosts the guitar signal from ~70mV RMS up to ~5V RMS. Synth signal levels can be up to 10Vpeak, so the preamp helps overdrive the ladder filter.

Which brings me to my favorite thing about this filter: that grimy, disgusting saturation. It's like velcro & silk had a bastard child and named him Bob Moog. It's quite a bit different from any overdriven filter I've played with, and the characteristic sound interacts with both the cutoff & resonance controls. Differential amplifiers tend to have really soft clipping characteristics, and this is like a diff amp skyscraper, so I imagine that's part of the magic. I wish there weren't so many finicky components in this circuit, as it's just a treat to play with.

Here are some audio clips:
I do have some problems with my single opamp input stage, which has this weird low to mid frequency clipping. So let me know what I've messed up: 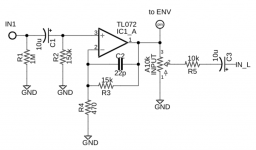 It's based on the AI Synthesis AI006 Stomp Box Adapter, but I increased the gain and left off the 10pF input cap, so maybe that's part of the problem. 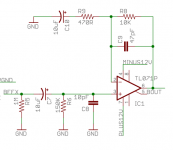 Wow! Cool. I remember studying that filter years ago.

Transistor diff amps are easily overdriven. Anything over 60mV at the input to your filter will start distorting. Bottom line: you have way too much gain in the opamp input stage. Try increasing R9. Or remove R9 & C10, making the input stage a unity gain follower. There are also tricks you can use to "pre-distort" the signal going in. The LM13700 has that option built-in. In fact, you can mimic the freq response of this circuit with cascaded LM13700s. The advantage with the LM13700 is the transistors inside are matched.

Transistor diff amps are easily overdriven. Anything over 60mV at the input to your filter will start distorting. Bottom line: you have way too much gain in the opamp input stage. Try increasing R9. Or remove R9 & C10, making the input stage a unity gain follower. There are also tricks you can use to "pre-distort" the signal going in. The LM13700 has that option built-in. In fact, you can mimic the freq response of this circuit with cascaded LM13700s. The advantage with the LM13700 is the transistors inside are matched.
Click to expand...

Where did you study it, if you don't mind me asking? It's such a cool circuit, and I'm glad they've documented the history of it as it seems to have influenced a lot of other designs.

Yeah I was surprised at how easily you could overdrive a standard diff amp, and how quickly it goes from "nice and saturated" to absolutely destroyed. Definitely a difficult circuit element to use for overdrive without careful level control & a bunch of feedback - which seems to make the overdrive less pleasant. On the other hand, the ladder filter seems to have a lot more room between clean & absolutely trashed.

The clipping I'm getting is present in the output of the opamp gain stage whether it's hooked up to the filter section or not, but in order to get a good range of overdrive on the input pot, I seem to need that big increase in signal level. The power rails are +-12V, so I'm not hitting the rails, but am I running out of bandwidth on a single gain stage? I was thinking of splitting it in to 2 cascading gain stages, is there a "best way" to set up the gain in sequential stages like that?

I guess the other option is to reduce the series resistor on the output of the Input pot (R5/10k on my schem), but I've experienced how finely balanced the circuit is while breadboarding it, so I'm reluctant to mess with anything that close to the ladder itself.

You're not running out of bandwidth. The full-power bandwidth of a TL07x opamp is over 100KHz. A TL07x will get within about 1.5V of either rail and saturate. That means if you have ±12V power, you should be able to get over 20Vp-p out of IC1A. If you're not getting that much, then there is something wrong with how it's built.

Now why would you need anything near 20Vp-p to drive the ladder filter?

Well that's good to know! Between 10 & 20Vp-p is the signal level for the Eurorack standard, which is what the Kassutronics Ladder Filter is designed around. I sim'd the original Eurorack layout with that 20Vp-p signal and and got ~400mVp-p (Input pot @ 50%) and ~900mVp-p (Input @ 99%) at the input to the ladder.

I'm definitely looking to drive the filter into OD territory, so I'd like to drive the filter beyond it's linear input range. I'm now realizing I'm going about that in a backwards way by boosting the signal only to attenuate it again. It looks like I could reduce that 10k resistor (R5) to between 1k & 4.7k and lower the gain of the input stage accordingly.

I would definitely reduce R5 if you want to overdrive the diff stage harder. Because the filter has a low input impedance, you're basically driving it with current. You'll blow the transistors before you ever get 20Vp-p at the L input.

You may be in uncharted waters here. Do you know of anyone else deliberately overdriving the ladder filter?

Sounds good, I'll give it a try on the BB.

I've seen a lot of synthesizers & modules that have options for overdriving a ladder filter, but not so much in pedals. I just recently found a schematic for the Moogerfooger MF-101 Lowpass Filter, which is a ladder filter pedal with a drive control, but the ladder itself is quite different. The ladder itself seems to run on +-5V supply and uses CA3086 transistor arrays, which I'm not super familiar with. It does seem to use a gain stage to drive the ladder, but I'm not sure if it's an apples to apples comparison in terms of signal level. 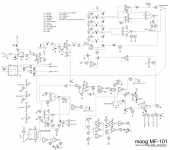 The advantage of a transistor array is they are all matched and run at the same temperature.

The way they're implementing the DRIVE control makes good sense. Is that Audio IN jack intended for guitar level signals or line level signals?

Chuck D. Bones said:
You may be in uncharted waters here. Do you know of anyone else deliberately overdriving the ladder filter?
Click to expand...

As long as he doesn’t cross the streams…

Chuck D. Bones said:
The advantage of a transistor array is they are all matched and run at the same temperature.

The way they're implementing the DRIVE control makes good sense. Is that Audio IN jack intended for guitar level signals or line level signals?
Click to expand...

Yeah I've seen those arrays in quite a few transistor ladder schematic, I'd give them a go if I could find a reasonably priced equivalent. I'm leaning more towards the BCM847 NPN matched pairs as they're cheap (~$0.50ea) & easy to drop in to other differential pairs like VCAs & oscillators. Most of the stuff I've read on ladder filter circuits points to the top & bottom pairs as being the most critical to match closely, but I haven't seen much on how matching between pairs effects the sound.

The MF-101 manual says you can use either instrument or line level sources, adjusting the Drive control accordingly. Running on +-5V, the headroom on the ladder is probably quite a bit lower on the MF-101, but I may give that Drive control a go in LTSpice and see if I can get it scaled up for my circuit.

Btw, those changes you suggested worked a treat! I decreased R5 from 10k to 1k and dropped the opamp gain by about half. I've left a trimmer in there until I can find the ideal values, but the weird clipping is gone & the Input control can go from clean to saturated without any harsh artifacts. The overdrive is also much smoother, especially when the cutoff frequency is sweeping at high resonance settings. Thanks for the advice, Chuck!