Not quite a Parentheses [brackets?]

Sorry for the non-pedalpcb content. I am waiting to see what the mofetta is before I place an order (in the U.K. and shipping/customs adds up!)

This is an EQD Life clone like the pedalpcb mini parentheses, but from that Czech website pcbguitarmania. It works and sounds great but is not without its... quirks. 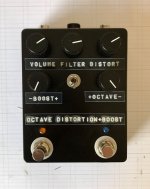 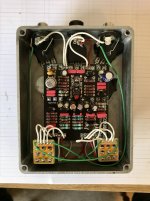 The good - sounds excellent. Like a Green Ringer, a Rat, and a mosfet boost.

The bad - there are some questionable layout choices on the pcb.

I guess those are fairly picky complaints as the pedal does work flawlessly otherwise. I’m just used to the super clean pedalpcb layouts.

I got a metal can UA308 op amp for it, for the sake of discontinued magic fairy dust mojo parts.

I only have a modern production Rat with the OP07 op amp to compare with and they sound generally the same, when I’m in the normal clipping mode with the octave off. I wasn’t expecting much difference though as I’m mainly using it with the distortion up high into a crunchy amp, for doomy stoner rock sounds. I suppose any op amp differences are probably lost under all that gain.
It does do that sag thing more than the OP07 rat though, when using high distortion settings and high output pickups. Not sure if that is the op amp or something else.

I tried the stock clipping options first but I socketed the second clipping mode so I could experiment. I’ve currently got to Russian germanium d9e diodes in there and I like that.

All in all, great pedal for the Rat sound. Though I think I’m still gonna pick up the full sized Parentheses pcb when I next do a pedalpcb order. Can’t have enough Rats.
Last edited: Monday at 2:13 AM

it's no fun without them!
M

mnemonic said:
Sorry for the non-pedalpcb content. I am waiting to see what the mofetta is before I place an order (in the U.K. and shipping/customs adds up!)
Click to expand...

Isn’t it a clone of the EAE Model feT?
M

manfesto said:
Isn’t it a clone of the EAE Model feT?
Click to expand...

I’m not sure, I saw it mentioned in a wishlist thread, but there are a few model T pedals out there, some jfet copies of the model T preamp, and some that appear to be something different. I guess we’ll see!
You must log in or register to reply here.
Share:
Facebook Twitter Reddit Pinterest Tumblr WhatsApp Email Share Link
Top