DEMO One for the grandpa guitars.

This post contains an audio or video demo
P

Made this for my father as a spitball solution for finding the ideal sound for recording acoustic guitar. I may post a demo later if he finds the time to use it and provide me with an A/B recording!

The pedal is a four in one. It features the PedalPCB 6-band EQ into the Delegate Compressor (Boneyard Edition) into Uni Cab into the Sproing Reverb!

The four circuits are connected in series through the loop of a GPCB Buff n' Blend which allows a dry signal blend.

I rated this a four because there was a sever in the trace between pin 8 of the TC1044 and the diodes preventing power from getting to the opamp of the compressor. It was a simple fix but it took a couple nights of looking at it and putting it down. I was getting a "Dry" signal when all pedals were engaged and the blend was dialed to "wet." The prospect of diagnosing a not at all obvious problem among five PCBs is daunting.

After visual inspection failed to yield any problems, I found the issue when measuring voltages of all the ICs. I found no voltage at the IC and located the issue at the severed trace. Very simple fix, however, I'm the type of guy who likes things to go off without a hitch.

The other issue is the Ratio control is slightly out of line. I keep forgetting larger enclosures have a lid screw in the middle which takes up room. inside the enclosure. D'oh! 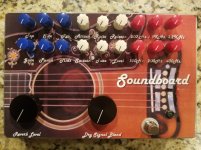 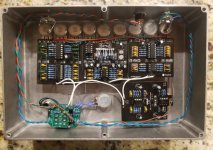 Here's a quick run. I am using my semi-hollow archtop with a piezo straight into a cheap, Dean acoustic amp.

I like that. Very clean build and great graphics!
A

Tidy! And, it sounds awesome
P

DGWVI said:
Tidy! And, it sounds awesome
Click to expand...

Thanks for the kind words all. Sometimes I can make a clean build if I try!
P

Another demo from my father. He used the pedal direct into his DAW on his MAC and used his Martin D28. The choice of percussion gets distracting, lol.

https://soundcloud.com/paul-eliasson%2Fsound-boarf
You must log in or register to reply here.

This Week on the Breadboard: A Stereo Digital Reverb