Staff member
It's time to start discussing the next iteration of the Terrarium.

I know, I know, "But we're just getting started with this one!".... The Terrarium has always been intended as a starting point, a prototype, a beginning. Eventually we'll want/need to move forward into a more production-ready platform.

So far the planned feature set is:
The control set is similar to the Terrarium, except two of the toggle switches would be sacrificed in favor of a pair of three-position toggle switches. 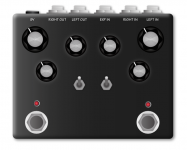 Nice! Do you have any thoughts about providing a means to let users do firmware updates? I don’t know if there is a way to map the two interior button functions to the front somehow, and also build it so the USB port can be easily accessed, but I could see that being very handy for releasing software updates and bug fixes for production pedals.

Looks slick. An optional CV out could be interesting.
Pads or headers to expose GPIO that aren't otherwise occupied could be a nice feature for miscellaneous additions.

Would an additional LED (optional?) would be a good idea for visual clue of any effect with rate/speed control?
G

This is amazing...
Rate / speed led would be great too as suggested.

I like the relay bypass switching and three way switches, but I think the exact layout will probably be effect specific? It sounds like this would be less of a prototype where the more switches, leds, and pots the better.

I think if this is going to house two separate effects in one box, then 3 pots per effect may be a bit too few since a volume pot for each effect is probably necessary. If the two footswitches are just going to activate different features of the same effect (like bypass & gain) then 6 pots seems about right. For two separate effects one of the switches would maybe be dedicated to an order switcher instead of an effect parameter too.

It Seems like one major benefit of the Daisy Seed over the spin FV1 chip is that many features of the effect can be controlled interactively instead of just 3. This pushes towards allowing for more pots to be used......but maybe I am just more of a knob turner than others.

I think it could be cool if this was used as a configurable platform for different effects. The idea would be the PCB itself would have spots for lots of hardware to be attached (to be over the top): 12 pots, 4 switches, 4 leds, 2 footswitches. And the builder would decide to populate only the items they needed for the effect(s) they were building. Maybe the delay/reverb they are building only needs 1 switch, 2 leds, and 6 pots - so the other spots on the pcb would be left unpopulated. Maybe this amount of flexibility would be confusing....or people would just populate everything all the time for flexibility...which seems against the point of this platform.

Staff member
Exactly. This isn't intended to be a prototyping/development board, and not really a "one size fits all" configuration. I'm working on a design for a desktop-based development platform that will be geared towards prototyping.

Rather than try to design one swiss army PCB I think it would make more sense to have multiple options available depending on what a particular effect needs. (and then certain controls could be omitted from each board) There are just too many variables to try and make one board that fits all control configurations. I have absolutely no problem with creating as many different board configurations as required.

My thinking is that the second footswitch here would be used to control a secondary function (tap tempo, modulation on a reverb, filtering on a delay, etc) rather than a separate independent effect. This control layout is inspired by pedals made by the "big S".

I haven't looked at the problem and associated constraints closely enough to really know, but I'm wondering roughly how many likely groupings of "parameters + display indicators" there are. 3 groups? 5 groups? 99? ...

Clearly there's a huge number of possible combinations, but I would think that there's a distilled down set, of which the Paludarium is but one likely example.

By "likely" I just mean what's apt to occur in practice, what's common, what's most useful... that sort of thing.

Anyway, just wondering ... It would be interesting to analyze, 'cos I like statistics and UI/UX design (data driven design).

Couple things that i've been most curious about/biggest wants from a bigger option:
- Encoder (I know that you said there was a way to an encoder by pot, but I'd prefer something that has detents)
- BiColor or RGB LEDs - Is that what you mean by programmable LEDs above?
- 3 footswitches - or having the ability to choose 2 or 3 footswitches, as some ideas would really benefit from the 3rd footswitch, and others might be better suited to 2

Staff member
The way I see it, a lot of ground can be covered with a few pattern variations.

A third set of switch pads could be added in the center to allow for a single switch option.

If a third LED is added near the center (eg for the rate indicator mentioned above) then it could double as a footswitch LED for a single footswitch configuration.


Three and five knob variants would require a different control pattern (if you want a symmetrical control layout), but those could both be covered by a single board.


There are always going to be special case circumstances, the Arachnid and Pythagoras served several different effects combinations over the years but neither were a good fit for the Organ Donor, Leprechaun, or Deflector. Similarly, those three PCBs don't really lend themselves to a lot of other effects, so a universal PCB would be messy.

Even with the Arachnid and Pythagoras boards there were always compromises.... I can't count the times I just needed one more digital control, or had an extra pot that had no purpose in a particular algorithm.

The Daisy has a huge advantage though, with it's increased processing power and extra control inputs, because a lot of the analog workarounds that were used in the Organ Donor, Leprechaun, and Deflector can easily be accomplished without "hacking" in additional functionality like was previously required with the FV-1.

untamedfrontier said:
Couple things that i've been most curious about/biggest wants from a bigger option:
- Encoder (I know that you said there was a way to an encoder by pot, but I'd prefer something that has detents)
- BiColor or RGB LEDs - Is that what you mean by programmable LEDs above?
- 3 footswitches - or having the ability to choose 2 or 3 footswitches, as some ideas would really benefit from the 3rd footswitch, and others might be better suited to 2
Click to expand...

These are all fairly simple to do, and will definitely happen in some form or another.

As mentioned in my last post, it'd be a simple task to add a third set of pads for an additional (optional) footswitch and/or LED. This would probably be the best option since that would easily accommodate one, two, or three footswitches.

Adding a rotary encoder will definitely happen in another revision of the board. Generally a rotary encoder also needs some form of visual feedback (ring of LEDs, 7-segment LCD, etc) since there are no start/end points and a knob pointer has no point of reference.

RGB LEDs are no problem either, it just involves giving up two extra GPIO pins per LED (or the use of an addressable LED driver IC)
By programmable I just mean the LEDs are controllable by your program, not hard wired to the footswitches like the FV-1 boards.

As we move along there will definitely be larger "multi-effect" geared boards where these will be more useful.... but before we get too carried away we need to solve this 1kHz noise issue that keeps popping up.
P

Regarding encoder for multi-effect, any thought to just using the same 8-way rotary sw as the arachnid? Just need 3 input pins (and all the diodes), but don’t need indication leds... I know some folks have had quality issues with those, and they were out of stock everywhere this summer, so not sure if that’s a good solution or not, just throwing it out there as simpler than drilling all the LEDs for encoder indication. Of course LCD screen would be awesome for a multi effect, like the mimirs well project.

just my two cents, may be best to offer a separate pcb for each of the standard configurations. There’s been sooo many threads (including questions by me when I got started) about the arachnids/pythagorus and their related projects. Adding a bunch of pot / sw/ led options to the pcb would probably lead to lots of confused builders.

edit: this project is very exciting, thanks for all the development work.

That's actually easier with the Daisy than it was with the FV-1... It can be done with one input pin and 7 resistors.

The limitation there is that you are bound to either 4 or 8 positions. With a rotary encoder you have virtually unlimited positions of any number.
P

Ah I see, since you can use analog input, nice. Yeah that limitation is something to consider.

With rotary encoder, I suppose the limitation is how many LEDs you want to drill for? Or with RGB one led could be a bunch of colors, so patches could be mapped to color?

Staff member
Yes you could use RGB but you'll only get so many distinct colors before it becomes hard to distinguish.

I tried this with the FV-1 program selector at one time, it worked but it wasn't ideal.

Am I stupid suggesting to use Pots instead of switches? I mean, technically we can always use a pot with < 50(left) = Off and > 50(right) is On since Seeds are more flexible than "usual parts".

In other words, an on/off switch is limited to being a binary value while Pot "could" be transformed into a binary thing if needed in a Daisy context.

Do I make sense?
P

I’m guessing the fine line between maximizing features and use-ability? I like the idea of some knobs and some switches for this type of pedal. Some controls are just more user friendly as switches than knobs I think (quarter vs dotted eighth delay, standard vs harmonic tremolo).

You’re not wrong it could be set up that way and knobs could be used smooth or >50% binary. So possibly there could be pads for both.

Staff member
Maybe for prototyping / development, but using a knob with full rotation to select between two or three fixed options would just feel wrong in an end product.

This isn't intended for prototyping, this particular board is meant for a finished design.
You must log in or register to reply here.