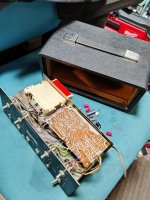 I bet that thing smells amazing!

As standard practice, I typically bury my face in newly acquired vintage audio equipment as part of my intake procedure.

Is it an echo machine that runs off an 8 track cartridge?

Harry Klippton said:
Is it an echo machine that runs off an 8 track cartridge?
Click to expand...

Close! It's a 4mm tape, though. The cartridges are basically impossible to find.

That said...they're very similar to an older format called "playtape". A little mod to the tape or the machine and those will work just fine. They can be had on eBay for like 15 bucks a pop. I got 4 for $35.

No space echo, no echoplex. Best known for what EVH, may he rest in peace, used to get that last, spacey note in eruption. Not that I'm big into Van Halen...which could possibly get me tarred and feathered depending who I say that around. The way I feel about their music is similar to how I feel about dream theater's: technically impressive, I can jam to some of the riffage, who invited the vocalist? Hey...I gotta go, man.

But yeah...got plans for this one. Gonna swap out all the electrolytics, and the rest of the caps in there better watch their step or I'll swap them too. There's about six 4.7uF electros in there that I'm gonna replace with polyester...nice 5mm spacing on most of what's in here...these caps are HUGE for their 16v rating. Gonna give it a grounded cable power cable too, safety first.

I have no idea how long the tapes last...the part that wears the quickest apparently is the foam behind the tape: easy enough to fix. Methinks it'll be cool for studio work as a send effect...mechanical noise and all.

Best part? Picked it up for a cool 130 on eBay. "Not working", but for it's age cosmetically great condition. Little bit of elbow grease and she'll be cooooooollll.

Very cool. I love everything tape! I'm perpetually bummed I didn't buy a space echo 10 years ago when they were like half of what they go for now. I've got several 8 track machines, reel to reel, cassette players out the wazoo, tascam machines, most of that shit is broken or needs work, ya know. I've seen those univox units come up for sale every now and then. Keep us posted on the progress!
You must log in or register to reply here.
Share:
Facebook Twitter Reddit Pinterest Tumblr WhatsApp Email Share Link
Top