A couple of weeks ago, I breadboarded Fender's The Pelt Fuzz. I like the Pelt's tone controls, but the distortion section was nothing special. So I set out to see if some mods might help. I focused my attention on the distortion circuit. The EffectsLayouts Lacerator gave me the idea of using something similar to the ToneBender Mark 3 for the distortion stage. The JFET-BJT Sziklai pair I had used in the Biggus Dickus looked like a good alternative to the ToneBender's darlington pair; it has more gain and higher input impedance. I kept the Pelt's Thick switch (renamed FAT, S2), but moved it to the input, same as the BD. Also same as the BD, I used a pot (VR1) in the bottom leg to vary the gain. I kept the Pelt's BLOOM control (renamed FUZZ, VR2) and upped it to C250K. It all worked great with a Silicon transistor in the 2nd stage (Q3), so I tried a Germanium to see how that sounded. It needed to be low-leakage to bias correctly, so I went with a Russian П28 (PNP). Sounded even better with Ge! OK, it wasn't exactly a blind test. I tried running the circuit with and without the Pelt's clipping diodes. Good tones both ways. More open and dynamic with the diodes out, denser and more compressed with them in. So I added a diode switch (S3). The two gain controls (GAIN & FUZZ) allow me to drive the 1st or 2nd stage, or both, into saturation. This distortion circuit can be easily dialed from clean thru mild breakup to overdrive and all the way to heavy synth-like distortion. I added R24 to adjust Q3's bias in case the hFE or leakage is too high. Didn't need it with the transistor I used (hFE = 62, Icbo = 15uA). Q3's collector voltage is right around 4V with no signal. If desired, one could play with Q3's bias to obtain gating by varying R24, R9 and/or selecting a leaky transistor. I did not go there.

I next turned my attention to the MID control. Fender's 3-way switch selects between flat response, a -4dB dip or a +5.5dB hump at 600Hz. Sounds pretty damned good as-is. First thing I tried was replacing the 3-way switch with a pot (VR4) so I could explore more extreme settings. I ended up with +10dB at 5:00, -13dB at 7:00 and flat around noon. At 5:00 it gets pretty bold, almost but not quite a "cocked-wah" tone. At 7:00 a huge chunk of the midrange is sucked out. There are plenty of good tones in between and I can get to Fender's switch settings at about 10:00, noon and 2:00.

Next thing to do was vary the frequency of the MID hump/notch. I tried several different frequencies and concluded that 600Hz was a good choice on Fender's part. About an octave on either side was also good, so I repurposed the 3-way toggle switch (S4) to select a MID freq of either 350Hz, 600Hz or 1KHz. Those frequencies are easily changed if one is down-tuning or running a bass thru this pedal.

Lastly, I retuned the TONE control slightly for more range and renamed it TREBLE.

So here it is. The mods are too extensive for installing on a Mouton board, so I went Vero. No paint or labeling yet. In my opinion, this is how Fender should have designed The Pelt. Is it my favorite dirt pedal? No, but it's versatile and a lot of fun and besides, we can never have enough dirt pedals.

BTW, 0.35" center-to-center is as close as you can get three mini toggle switches and still be able to tighten the nuts. 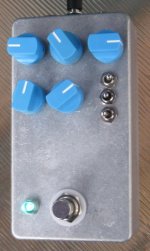 Yeah, it's a bit of a rat's nest in there. Stomp switch deliberately turned 90 deg. I used a quad opamp, but two duals, like Fender used, is also an option. 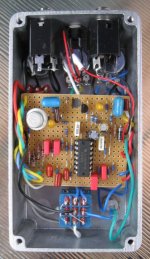 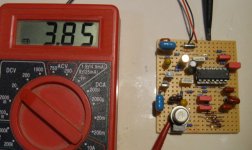 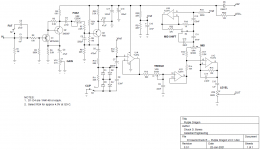 great write-up that tracks your thoughts as you worked through the variables in the circuit. thanks for putting that together.

Got the board done yet?

Why Pelt your amp when you can Pummel it? 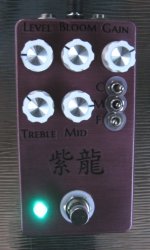 The P-touch labels are ok, but a water slide decal would be better.

You really got that paint technique nailed. Looks like it was born that way.

Awesome. Might have to build me one too then.... cheers!

I want to hear this thing, great write up. Going to put this on the to do list.

I just noticed that the distortion section resembles the Function f(x) Clusterfuzz. Seems like original designs are few and far between. 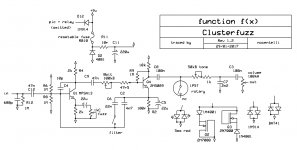 Hmmm… I’ve been gathering some ideas for a fuzz/ringer combo I’ve had planned for ages but never got around to. This definitely seems like an interesting choice to play around with— I wanted it to be something in the Tonebender world, and was thinking of just a MK3 gain section with a bandaxall, but this seems like it might be it.

When I get my latest parts order in I’ll make sure to throw this on the breadboard!

I have that same multimeter!…

It's a bummer that Harbor Freight stopped giving them away.

Chuck D. Bones said:
It's a bummer that Harbor Freight stopped giving them away.
Click to expand...

Bricksnbeatles said:
Hmmm… I’ve been gathering some ideas for a fuzz/ringer combo I’ve had planned for ages but never got around to. This definitely seems like an interesting choice to play around with— I wanted it to be something in the Tonebender world, and was thinking of just a MK3 gain section with a bandaxall, but this seems like it might be it.

When I get my latest parts order in I’ll make sure to throw this on the breadboard!
Click to expand...