Hi... I'm Mike, and I'm a glutton for punishment. Another Cornish build - though this one sans the pesky germanium diodes...

My "Thagomizer I" is a Colorsound Power Boost clone built with vintage components. The "Thagomizer 2" is the Pete Cornish take on essentially the same thing... well, sort of. Technically the ST-2 is based on the Overdriver, but the Overdriver and Power Boost are quite similar and there is so little left of the original Overdriver circuit in this labyrinth of components I figured it was okay to keep the moniker. The ST-2 to my ear sounds and functions more like my Power Boost clones anyway - at least to my ear. 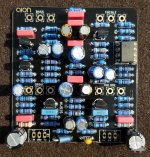 For this build I started with the AionFX Sigma, and as expected this is yet another very densely packed board. The ST-2 is also typical Cornish with many unusual values for the resistors. In fact, there are almost half as many resistors with a value of 100 Ohms or less in the ST-2 (a total of seven) as there are resistors of any value in the entire Overdriver build (15 not including the added RPD and LED resistors). Per my normal practice for builds modern components, I generally used the high-end component recommendations from AionFX purchased from Mouser. Where the recommended part was out of stock, I found something equivalent or better. The resistors are all Yageo or KOA Speer 1% tolerance. The film capacitors are all WIMA or KEMET. The electrolytic capacitors (and there is an army of them in this build) are all Nichicon. The IC is a TI TL071 in a high-end round hole socket. 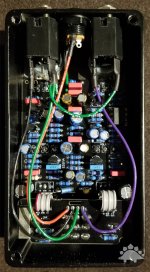 I'm trying to keep all of my wiring a bit cleaner these days, so I'm using more ribbon cable to connect the 3PDT daughter boards to the main board, and all of my hook-up wiring I'm trying to set at fixed lengths. All of the jack connections (input, output, and DC) are shrink wrapped. Since this is my personal prototype, I ended up re-using a couple of jacks that I'd mis-soldered in previous builds. This not only brings my prototyping costs down, but helps me get better at de-soldering components as well! 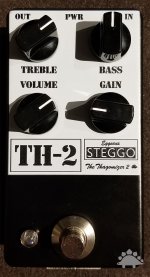 The enclosure is once again an homage to Pete Cornish's enclosures, but I had the foresight not to simply copy the ST-2 name. This is, of course, the TH-2 for "Thagomizer 2." I tested the pedal's sound last night practicing with my MIM Stratocaster, and honestly I'm extremely impressed. I expected it to be a bit louder than it was, but it's still plenty loud when compared to my Overdriver clone. It is also more of a boost pedal as even at higher gain settings you don't get some of the distortion that you get with the Overdriver at high gain settings.

Awesome build. This is one favorite boost pedals. It's always on. Love the enclosure.

Rad build! great artwork too. For some reason the big TH made me imagine Mike Tyson saying "Thteggo" instead of Steggo lol
M

What are your thoughts on the tonality of your TH-1 versus TH-2, i.e. Colorsound Overdriver/Power Boost vs Cornish ST-2?

I have a fair amount of experience with the Power Boost via the clone I built (Madbean MeatQlaw). I have an on-again/off-again relationship with it. Sometimes I’m like “yeah, this pedal does everything” and other times I’m like “I have a ton of pedals that are better than this”.

I read some discussions on the ST-2 on TGP, and the impression I got is that the ST-2 isn’t really much of a stand-alone overdrive, mostly just a clean boost plus EQ. But that’s just hearsay. What are your impressions?

The Colorsound definitely does stand-alone overdrive all the way up to fuzz, and also clean boost and EQ too.

I think comparisons to the Timmy (Tommy) and maybe even TCE Spark Booster (Ember Boost) are relevant as well, since they also fill the EQ + boost + overdrive multi-role category.

Honestly I need to play more with the ST-2 / TH-2. With my Strat or my Chapman (HSS strat clone with Semour Duncans), the original Thagomizer, with the Iskra just hits that sweet spot and is pretty much my "go to" boost pedal. I suspect the Cornish pedal will maybe go better with my EMG DG20 active pickup guitar, but as that one is upstairs on a different amp, I'm going to need to spend a couple of hours with them on the same amp to really get the feel.
You must log in or register to reply here.