Most of you that have read my build reports know that I got into pedal building because I wanted a King of Tone pedal.

When AionFX announced they were releasing their version I pretty much HAD to order the PCB (AionFx being my SECOND favorite PCB mfgr. )

The "Theseus" has it's own twist in that it comes with the option of adding an insert loop between the sides making it a bit more flexible for routing on a pedal board if you really wanted to use the two sides as independent pedals. The loop allows for some interesting routing options from a stereo rig to adding a boost between the sides. It also uses a 6 position dip switch to locate the "high gain" option (1k/100k) which is a pretty standard option. (That I don't completely understand since the original KOT uses a 10k resistor). It also doesn't include the charge pump 18v internal option. (Which is fine by me)

Anyway, after debating a bit, I decided to forgo the loop since my only reason for adding it would be for academic purposes, I'd never use it.
Also, it would have been impossible to expose the clipping options via toggle switches with the additional jacks and that to me is a more useful option to have.

The whole PCB+daughterboard is bigger than the Paragon and there isn't much room for toggles. So I decided instead of independent toggles for the clipping modes to just put them on a single toggle for each side with Soft/Clean/Hard clipping.

Reading through documentation they recommended using BAS33 clipping diodes for the soft clipping as they have the same curve as the MA856's.
I would concur that they sound very close to the MA858's at least. (Closer than the BA282's). Unfortunately, the BAS33's are also EOL'd but there still seems to be a lot in the pipe. I was able to buy a boatload of them from Mouser for around $0.15 ea. (There's still 28k in stock!) So if you're looking for some clipping diodes that closely match the original MA856/MA858's these are pretty legit. (Or DM me and I'll send you some for your build, I don't think I'm going to be building anymore KOT's after this). I used 1S1588's for the hard clippers but I'm not sure I could tell the difference if I used 1N914's.

So I had all five of my KOT clones out and all lined up doing some sound comparisons.

The Theseus (like the Paragon Mini and PCBGuitarMania boards) does not seem to suffer from the brightness that the full size Paragon does. Which is just as well since I built it pretty much stock without any of the "warmer tone" mods I did to my Paragon. In fact, on the Theseus I had to bump the internal presence trimpots about 25%.

The mods I did:
R3 - I went with a 10k resistor to match the Analogman schematic.
High Gain Dip Switch - Jumpered it on the 10k (low gain) setting.
Gain pot - bumped it up to a B250k for the additional gain range.

Compared side by side to the Paragon was probably not the most apples to apples since my Paragon has quite a few mods. (Warmer tone, mojo parts).
And I recently put BA282's in it, which is still my favorite soft clipping diode for these pedals. But the Theseus sounds really good, with the BAS33 soft clippers it sounds more like the original KOT, open, warm, organic with a hifi quality to it. Really awesome in Clean Boost mode.

Having said that, I like my full size Paragon the best, although the Theseus is a close second, followed by my Paragon Mini and then the PCBGuitarMania "King of Poor Documentation". Then a distant 5th place would be my DemonFX "King of Drive" KOT clone. It sounds pretty darn good for a $69 pedal but it just can't hang with any of my DIY stuff. It sounds like there's a blanket over it compared to my own builds. I'll chalk that up to better components used in my builds.

Anyway, I'm pretty KOT'd out.....I'm putting a fork in it after this build and calling it good. I've got a couple of awesome variants that I can use in different ways but the Paragon is full-time in the rotation. It never leaves and I'm usually just using the Clean Boost function. 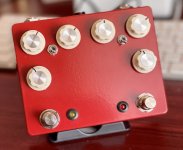 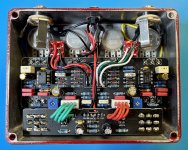 So the Paragon has been crowned your KOT…nice!

But have you ever tried a bluesbreaker into those? 11 is the magic number.

Staff member
Well we can't ever accuse you of not being thorough.

The Theseus is a nice looking project, I have absolutely no problem bumping shoulders with that one.

Awesome, thanks for the in-depth write up! A man with a mission, accomplished!

You are the King of KoTs!

All hail the king!

Thank you for the deep dive into your realm of KoTs, lots of good info you've shared.

In case you decide to use up the rest of those diodes...
GPCB Blues Buster x 2
Rullywow Queen of Bone
Lectric-FX Double*Take
...

Feral Feline said:
You are the King of KoTs!

All hail the king!

Thank you for the deep dive into your realm of KoTs, lots of good info you've shared.

In case you decide to use up the rest of those diodes...
GPCB Blues Buster x 2
Rullywow Queen of Bone
Lectric-FX Double*Take
...

I think the RullyWow version was one of the first ones I saw when this all started. They were out of stock at the moment.
I had also recently purchased a Zen Drive clone off Reverb and I remember opening it up and looking at the pcb that said "PedalPCB.com" so I typed in the URL and the rest is history....
You must log in or register to reply here.
Share:
Facebook Twitter Reddit Pinterest Tumblr WhatsApp Email Share Link
Top