This Week on the Breadboard - the Muff Bender Mk 1

This project ended up spawning a contest over in The Breakroom. I have some Muffin Fuzz boards (actually, some boards that closely resemble the Muffin boards) and I've been looking for things to build on those boards that are something other than BMPs. This is one of the things that came out. 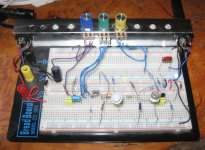 The first three stages are essentially a Tone Bender MK 1 with a few tweaks. I made it negative ground by replacing the PNPs with NPNs. The first stage is an emitter follower in the original circuit; I made it a source follower for lower noise. In an effort to stabilize the bias, I put in negative feedback resistors R9 & R14. I won't call the bias rock solid, but it's an improvement. I originally intended it to run on +9V, but the tone was way too harsh with Q2 & Q3 running on +9V. So I effectively cut their rails back to +3V by installing R25 & R26. R12 was not in the original circuit. I added that to lower the high-freq gain to keep my breadboard from acting like a radio receiver. It's all followed up by a BMP Tone control and an emitter follower output buffer. The output level is around 3Vp-p, so no gain stage at the end was necessary. Many different NPN Ge transistors will work. The ones I chose have HFE around 55 and Iceo around 100μA. Nothing special about those particular values. The bias can be tweaked by adjust R9, R13 and R14. With ATTACK dimed, Q2-C is at +1.25V and Q3-C is at +1.43V. The ATTACK control varies the gain by throttling Q2's collector current from 340μA down to 31μA. Very responsive to picking and guitar volume. Max gain is around 60dB. When ATTACK is advanced above noon, the sound gets quite dense. Try it, you might like it. All ref des correspond to parts on the Muffin board, except R25 and R26 are added on. They could be placed where C5 & C8 would go, with jumpers to ground from the D2-K and D4-K pads. 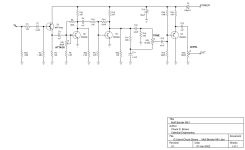 My first thought on the contest was to wonder if I could make a GE fuzz on a muff board, then I come here and there it is, and you make sound so simple and complicated at the same time

A competitive entry can be simpler than this. This circuit was the result of me playing "what if?" You don't need a scope or LTSpice to do that.

Man. My first thought when I saw the contest post was a Ge sandwich in a JFET hoagie roll.
Lookin pretty sweet. Any particular reason to use a BJT output buffer over another JFET?
Last edited: Jan 9, 2022