This is the second of two builds of which @jjjimi84 was kind enough to lend his artistry. The inspiration for these were my and my partner's dogs. My dog Faust is pictured here. (Part 1 here)

The Dragon Hound is a parallel overdrive (modified Pale Horse TS-inspired) / distortion (modified Alpha Dog Rat-inspired) circuit. The overdrive block has MOSFET clipping, while the distortion block has opamp clipping. The FAT control is a dual gang potentiometer that controls the low-frequency response for both blocks simultaneously. (See @Chuck D. Bones's Contour Mod here for a similar implementation.) Also, thank you @Chuck D. Bones for helping out with the 2u2 film caps! Take a look at that gigantic 10uF film cap!

It's a great pedal with a few caveats. I would like to split the FAT control into independent pots (and not have to make another custom dual-gang...). Also, I think it'd benefit from having clipping diodes in the Rat circuit. At full-bore, it doesn't achieve the same saturated fuzz of a stock Rat unit, but it has a very nice distortion nonetheless. It definitely pairs well with the TS circuit. This may be obvious, but the parallel arrangement adds a level of complexity that is quite distinctive from series.

I'm not sure if I'm totally finished with this build. I'm getting a bit of weird behavior with the LEVEL control: the sweep is not totally smooth and is a bit touchy. Since it's controlling a standard Rf in an inverting opamp block, there might be an issue with my pot. Beside that, I'm really enjoying it.

The only real problem with these two builds is that I'm going to have to build some less beautiful ones to stomp on!

Is Faust a Boston terrier or a boxer?
B

Harry Klippton said:
Is Faust a Boston terrier or a boxer?
Click to expand...

Boxer! But all smoosh-faces are great!

I had 2 boxers growing up and miss them dearly. The second one, Jake, was 90 lbs of stupid and I loved him for it
B

Oh man, they are the best. Me and my family have had four boxers. Absolutely love those dogs. 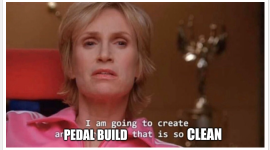 This looks great all buttoned up! Nice work
B

jjjimi84 said:
This looks great all buttoned up! Nice work
Click to expand...

Yeah! They turned out great. Thanks again!