Who's down for some SMD layouts?

PedalPCB said:
The kind of circuits I have in mind don't have too many germanium components.
Click to expand...

So toneless? Everyone knows that the tone is in the Germanium…

PedalPCB said:
Solder paste without a stencil makes me want to just start buying pedals.... or just become a drummer.

The kind of circuits I have in mind don't have too many germanium components.
Click to expand...

Wasn't quite that bad, I think Transitors will be easier as the legs aren't so close, future I'll probably just use it to set the corners on chips

Well, we gotta finish tracing it first... I've been working on it for about a year now.

Every couple weeks I glance over at it then trace another Tube Screamer instead.

I actually picked it up to take a photo today, so that's progress. It's not so much the complexity of tracing it that I dread, it's the realization that this circuit is not going to fit into a reasonable sized enclosure with through-hole components.
Last edited: Jan 2, 2022

PedalPCB said:
Keep em in the tape reel and that's not an issue, although removing them from the tape is probably the most time consuming part of assembly.

You can use whatever you want... I will say, I built a prototype for an overdrive this weekend that used nasty old ceramic disc capacitors throughout the entire signal path. (330pF all the way up to 1uF) I could have used film, I suppose, but the original used ceramic so that's what I used... It has become my favorite overdrive.

I'm not arguing the theory against ceramics, but I'm also not convinced that the hate is entirely based on objective audible results (vs what I read on a forum) in every case... this ain't HiFi. Don't mind me though, I generally don't modify or "fix" the quirks with original circuits either unless it's obviously broken in an unusable way.

Of course there's no reason we can't mix in some through-hole caps when absolutely necessary. The goal here isn't to torture your soldering skills (or supernaturally sensitive ears), the goal is to cram 10lbs of s**t into a 1/2lb enclosure.
Click to expand...

For sure...I'm the kind of guy that measures out ingredients to precise ratios when cooking whilst having all available counter space occupied by dirty dishes and oh shit my 1/3 cup has gotta be around here somewhere WHY IS COOKING SO HARD.

Only thing about ceramics that makes me weary, though, is temp coefficient on non-C0G. Some of those...shit gets wild. Not a problem in power supply filtering...but tone stacks?

Though, clearly, germanium suffers from this same issue. Personally, I've never fallen in love with a Ge fuzz. I like my chaos to be consistently...erm...

Huh. Walked right into that oxymoron. Whelp, I stand by it.

I'm pretty happy with my SMD system I've cooked up. Amazon has a lot of tool and gadgets for 'beading' and it's pretty perfect for SMD parts.
Removing each one from the strip is the longest part, so I got little beading cups with screw-on lids. I pull the whole strip of parts into the cup at once.
When I need a part, I tip the cup over into a tray with a little funnel on it, so when I'm done with that part, I can just funnel the SMD parts back into the cup.
Another great tool I made is a combination tweezers and 'helping hands' part holder. I got some reverse tweezers (closed by default, squeeze to open) and used my laser to cut some plastic discs (one with a notch) to make a 'base' to hold the tweezers in an upright position and apply downward force on the part it's hold to help keep it in place while I solder.
I use some magnifying visors, but those microscopes are getting really cheap and probably my next purchase. 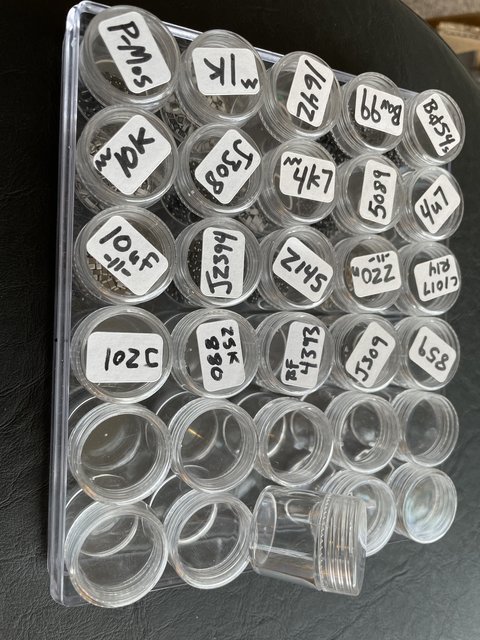 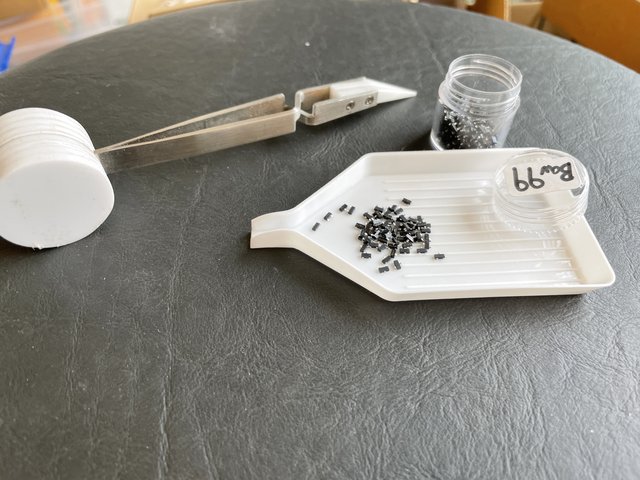 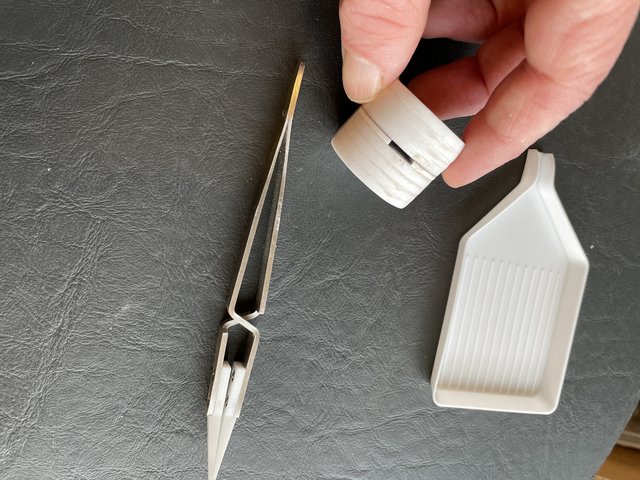 Popnfreshbass said:
I’d be up for it for sure! But It would have to be the right project. I mean I wouldn’t want to do a full smd board that’s just a Tube screamer or 250+.
Click to expand...

Absolutely, I have no intentions of making a project SMD just for the sake of being SMD... The decision would be based on circuit complexity and/or enclosure size constraints.

With that said, I'm thinking the first SMD project will likely be an adaption of one of the basic overdrives as a sort of "Introduction to SMD assembly" for the beginners. Slightly oversized board with healthy spacing and a variety of common components... rather than throw folks into a Low Tide for their first SMD experience.

Hey! So you aren’t going to start with the SMD low tide in a 1590A enclosure?? Disappointing.

JamieJ said:
Hey! So you aren’t going to start with the SMD low tide in a 1590A enclosure?? Disappointing.
Click to expand...

We could use a big flexible PCB sheet and just roll it up and stuff it inside.

JamieJ said:
Stacked boards in a 1590A

That's actually not all that uncommon.

I've noticed the hot air station also has a bit of a learning curve, but as mentioned with other methods it mostly is due to too much / too little / improperly placed solder paste. Solder bridges seem to be given, but the fewer the better.

Anyone have a recommend for stencils? I've seen quite a spread so any direction is appreciated.

fig said:
Anyone have a recommend for stencils? I've seen quite a spread so any direction is appreciated.
Click to expand...

The easiest way is a stencil that is designed specifically for the PCB you're working with. (although not the most economical for one-offs)

I should have a generic FV-1 IC stencil made though, that's one application that would definitely benefit.

PedalPCB said:
That's actually not all that uncommon.

I’ve never soldered an SMD resistor or capacitor but I’m assuming 0805 will be absolutely no problem and 0603 are a challenge but do able with the hand soldering approach?

JamieJ said:
I’ve never soldered an SMD resistor or capacitor but I’m assuming 0805 will be absolutely no problem and 0603 are a challenge but do able with the hand soldering approach?
Click to expand...