I am making another parallel build using the GPCB Buff n' Blend. My build originally called for the leprechaun and unison tracker in parallel.

I found the first Haarp build I ever did which was not a success and i put it aside. I decided to revisit it, replace incorrect components and reflow solder joints.

Here is where it gets interesting. In testing the Haarp, i wired the input and outputs of the boards straight to jacks. When i plugged in the power the LED did not light nor did i get any signal. I then wired up a 3pdt the usual pedalpcb way and it fired up just fine.

When i fired up the effect, i got no signal from the haarp/ leprechaun side, the unison worked fine. I suspect i will need a jumper between the input pad and ground pad of the haarp to get signal.

If anyone else could chime in with their thoughts and suspicions, i would appreciate it! 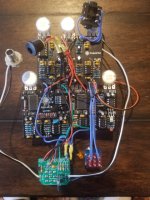 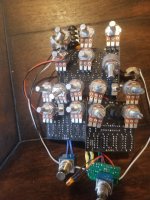