Guitar direct to Pd on a computer:
Essentially yes, just an audio interface. Crank up Pure Data and look in Preferences to select your interface from the audio inputs. Many current interfaces have guitar inputs that have a JFET buffer or something similar so signal is pretty good if you plug in directly, my Audient EVO 4 has that. Otherwise you can treat your signal a little before going into a line input. I've heard that just putting a pedal on the way of a non-guitar-specialized input is enough (recalling something about wanting buffered bypass?) and that works for me. I hope people here have pedals (ha ha how very droll).

Remember that you can learn to use Pure Data without guitar signal too (heresy!). You can synthesize sine waves or input audio samples.

Docker for Pd/Terrarium:
A fine idea for the Pd-to-binary (.pd -> .bin) part. It would be an alternative to the GitHub template. An approach would be to put an image on Docker Hub that you could pull into Docker Desktop and start up as a container looking at a folder on your computer for a .pd to arrive. You save your patch there, and the container then converts it to a .bin. This could be simpler than setting up the things the GitHub template needs, as long as getting a grip on using Docker doesn't make the whole affair less simple again.

A wackier idea would be to put up a website where anybody could drag-drop a .pd file and get a .bin back. It's not really wacky because IIRC the Heavy compiler had a website like that once. Putting the two things together, that website would probably in fact be a Docker container, but not one you run locally.

For any of the above, additionally getting the process to push the .bin directly to the Terrarium for you would be even more sauce.

Gotta say that i still run into problems wiring knobs. Now focused on finding how general this problem is and the fundamental cause.

Most if not all issues with knobs were merely PEBCAK - knob objects are just that, objects and not messages. Resolved.

Updated `terrarium-puredaisy` template patch to have Knob 1 twiddle tremolo frequency.
That said, i am liking a Docker/webapp approach to these tools more and more.

Plate of Shrimp said:
Most if not all issues with knobs were merely PEBCAK - knob objects are just that, objects and not messages. Resolved.
Click to expand...


Plate of Shrimp said:
That said, i am liking a Docker/webapp approach to these tools more and more.
Click to expand...

The smaller the barrier, the more people can be involved. But I'm just throwing ideas. I'm not advanced enough to work on the thing. At least a newbie like me got a "fresh eye" on stuff advanced people take for granted. So I could at least help on documentation.

Spun off a patch that plays a chord for you using the knobs for note volumes. 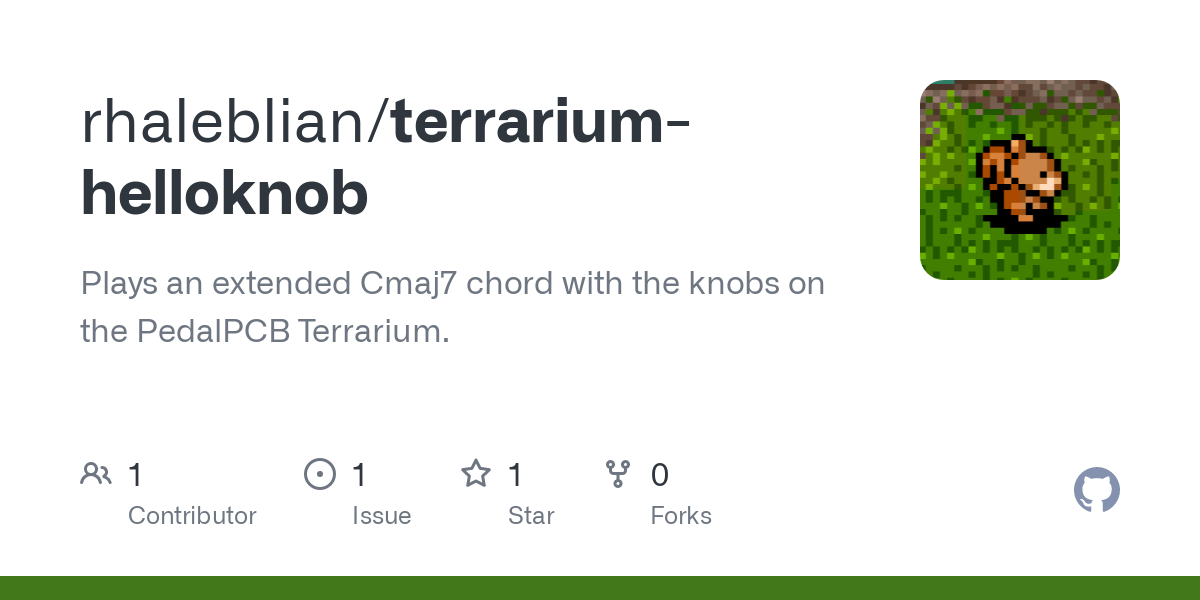 GitHub - rhaleblian/terrarium-helloknob: Plays an extended Cmaj7 chord with the knobs on the PedalPCB Terrarium.

If you just want the binary immediately, see the Releases:

The binary for this patch. You can download and program this directly. helloknob.bin.zip