Greetings. I was working on a build last night and decided to measure my 470nF film box caps from Tayda before using them. I found they all had a pretty high ESR, around 6-8 ohms.

So I went on a bit of a testing spree: 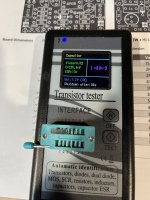 220nF caps from Tayda in the slimmer box measured 17-18 ohms! It’s worth noting that lower value caps (47nF was next highest value I had from Tayda) did not register any ESR on the meter. Higher value caps have more film in them, so naturally they have a higher resistance.

I decided to test other brands: 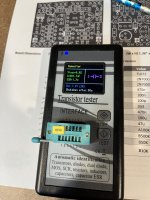 This is a 1uF cap from Small Bear (Topmay I believe) measured just 1.7 ohms. Still on the higher side compared to lower values but nowhere near the Tayda ones. A Wima 1uF from Tayda measured about 1.7 ohms as well.

I determined that for my purposes, as input and output coupling caps in a Zendrive clone, the Tayda caps were fine. They were within spec for their value and had no leakage, and they wouldn’t add anything to the series resistance that’s already there.

That said, I just wanted to share incase anyone explicitly needs low ESR for a specific application, look to higher quality stuff. I’ll be ordering and testing some of the KEMET stuff from Tayda, as the highest value I have of that brand is 100nF, and that one had no ESR register on the meter. I’d say KEMET from Digikey or Epcos (I think) from Mouser are good alternatives to Tayda caps in bulk.

I’d appreciate if someone more knowledgeable chimed in here as well. My understanding of ESR and it’s implications in different circuits is pretty limited.

When you say Tayda, do you mean the JB brand?

Edit: my eyes are so bad I didn't notice that you had a cap plugged in to the tester in the first photo, I can see now (literally) which ones you are talking about.
Last edited: Nov 27, 2021

I'd be happy to include some measurements of various cap samples if you think it would be useful. I just got some Nichicon polymer ECs as well.

peccary said:
When you say Tayda, do you mean the JB brand?

Edit: my eyes are so bad I didn't notice that you had a cap plugged in to the tester in the first photo, I can see now (literally) which ones you are talking about.
Click to expand...

No worries it’s out of focus anyways. I believe they are mostly “Arcotronics” as I bought most of them before 2019, except the ones in the photo were bought in 2020 and I think are “Faratronics” I see ones in their site now cited as Faratronics and JB as well, I don’t believe I have any of those.

I tested a 100uF 16v electrolytic from JB and it was less than 1 ohm. A 47uF 25v Nichicon tested a bit higher. I’m not entirely sure how ESR scales with voltage rating. Charts online show that for electrolytics lower value, lower voltage caps have higher ESR than higher value, higher voltage ones. This would contradict my logic for film caps derived from my measurements.

fig said:
I'd be happy to include some measurements of various cap samples if you think it would be useful. I just got some Nichicon polymer ECs as well.
Click to expand...

If you would like to sure! I’m still unsure of what the implications of ESR are in different situations.

Chuck D. Bones said:
Low ESR is beneficial when the capacitor is used as a power filter, particularly in the presence of a switching converter like the charge pumps we use in some pedals. Low ESR makes them better filters and there is less power loss. One must also take ESL into account.
Click to expand...

Here’s a quote from Chuck found in this thread:

The Bollocks - a King Midas

Found this one almost ridiculously dark. Changed C3 to 10n and C4 to 680n and it really opened up. Rock'n'Roll machine. Reverse etched faceplate and PPCB relay switching (really impressive - no clicks). Used a momentary switch marketed to DIY vape builders. We'll see how it holds up.
forum.pedalpcb.com

This is pretty much what I’ve read elsewhere. ESR is often not expressed on datasheets, but instead is noted as Max Ripple Current. For high frequency switching stuff, the internal resistance of a cap can cause issues and damage caps because of the power dissipated into the cap through that resistance.
Z

What is that tester you're using and where can I get it?

zachlovescoffee said:
What is that tester you're using and where can I get it?
Click to expand...

https://www.amazon.com/dp/B091281YKX/ref=cm_sw_r_cp_api_glt_fabc_DBB5K61RMZJ43KE1BF4J?psc=1
This is the exact one I bought. It’s useful and cheap but it has its quirks such as being iffy when testing FETs.

Looking for a transistor tester

I'm sure the tolerances are pretty lax. I'm planning to open it up and poke around. Edit: Okay I almost never got the door OFF again, LOL. So, nothing to see inside really (smd components and a mega328p), but I found if you loosen the two bottom screws slightly, the battery door fits better (on...
forum.pedalpcb.com
It’s featured in this thread along with another one, the TC-1 which looks a bit better and it does transistor leakage too I believe. Take a look.

One has to take ESR measurements with a grain of salt, particularly with the CCTTs (Cheap Chinese Transistor Testers). ESR varies with frequency and unless you know the test frequency that the meter used, you're still in the dark. As I mentioned in the other thread, ESR is important for power filters if there is high freq noise present, as is the case with charge pumps. ESR is not important for caps in the audio path because the impedance of the surrounding circuitry is much higher than 18Ω.
You must log in or register to reply here.
Share:
Facebook Twitter Reddit Pinterest Tumblr WhatsApp Email Share Link
Top