I was combing thru my schematic collection and ran across this circuit. A quick listen to an Andy Martin demo and it was time to breadboard! The EHX version is built around an NTK275 PNP Germanium transistor. Apparently, EHX wanted to keep the number of different part values to a minimum. The ferrite beads and 100pF caps are there to reduce RF interference. EHX puts them in many of their pedals.

I have some AC127s (NPN Ge) that I wanted to audition, so I flipped the polarities and ended up with this. Q1 is the amplifier stage. Not all that different from a RangeMaster. Q2 acts like a variable power source. With the VOLTS control, you can dial from 3V to almost 9V for powering Q1. Q3 is a buffer to keep whatever comes next in the pedal chain from loading Q1. The BIAS control varies Q1's collector current from around 40μA to almost 300μA. The GAIN control varies the gain from just above unity to about 35dB at 1KHz with all knobs dimed. All of the knobs interact and there are a whole lotta tones in there from clean to treble boost to light OD to gated fuzz. At low gain, the freq response is flat. At high gain the bass and mids are rolled-off and we have a treble booster. Reduce C1 to cut the bass at lower GAIN settings. Increase C5 if you want more bass at higher GAIN settings. Or install switches. The BIAS pot makes it possible to use just about any Ge transistor in this circuit. The AC127 I have in there is quite leaky (Icbo = 450μA) and it works great. 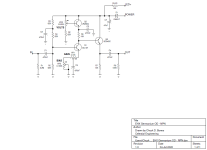 To me, it seems pretty weird to build a dirt pedal with no volume control, but it works ok here. 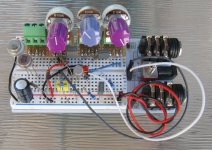 Just curious why Q2 is necessary? What would happen if it was omitted, and the "volts" pot was wired in series with Q1's collector?

Also, this circuit would likely be impacted by temperature, right? Given that it's "heart" (Q1) is GE? Presumably some tweaking of bias/gain/volts is needed in different environments?

The resistance between Q1's emitter & ground provides negative feedback which stabilizes the bias.
The minimum emitter resistance is 10K (the GAIN pot), which is high enough to keep the bias pretty stable.
A couple of other ways to look at it:
The DC resistance of the base bias network (R3-R5) is 41K from Q1's point of view. This is fairly low and will absorb a fair amount of leakage current which also stabilizes Q1's bias. It is also low enough that the circuit will not be too sensitive to HFE variation.
The voltage at the emitter is around 3V, depending on the BIAS setting. This is huge compared to Q1's Vbe, which means that the circuit is not sensitive to Vbe variations.

Bottom line: if there is enough resistance in the emitter circuit, then the bias point will be very stable. This circuit has plenty of emitter resistance, even with BIAS dimed.

Would it be a fair comparison to the two stages of a dual-triode (vacuum tube/valve) (low-gain/low imp, hi-gain/hi-imp)?

Not sure I follow. Which part of the Germanium OD are you comparing to vacuum tubes and how are the tubes configured?

If Q2 were taken out, and you added a Q1S-Q2E resistance, rearrang...and held it up to the light just right..on second thought, it'd still be nothing like a 12AX7 preamp circuit.

This Week on the Breadboard: Animals Diamond Peak Overdrive (with some mods, of course)

This Week on the Breadboard: The Voodoo Woman
2

This Week on the Breadboard: Boss OD-3

This Week on the Breadboard: BJFe Arctic White Fuzz
2