So I'm putting together the Woodpecker (hummingbird) right now and figured that before I box it up, I should look into some minor mods. I came across this mod in a build doc from pcbguitarmania, where an led is placed in parallel with R10 in the schematic below, which seems to correspond with R6 in the pedalpcb build doc. However, the component values between these projects differ, so I wanted some advice before I potentially (worst case scenario) fry a $3 2n6027. (I am a cheapskate)
ALSO:
•Would the polarity of the led matter?
•The build doc says this affects the led can "add color to the tone" or change the behavior of the rate. Would it be worth putting it on a switch?

Tried in mine, it doesn't work. The tremolo effect is gone if you add any sort of LED in that position.

jesuscrisp said:
Tried in mine, it doesn't work. The tremolo effect is gone if you add any sort of LED in that position.
Click to expand...

After looking more closely at your schematic snippet, it occurs to me that something is off around the 2N6027. I got the LED to work there when R10 was raised to between 1K and 2K. (I used a 2K for R10.) A 5K trimpot at R8 allows the 2N6027 (PUT) to be biased for their various switching characteristics.

I have schematics for and built both the PUT and UJT versions of the Woodpecker/Hummingbird/Repeater circuit and they vary mostly in how the switching device (the PUT or UJT) is set up. For the 2N6027 (PUT) version, R8 is much higher at between 1K5 and 5K (ergo the trimmer in that position for the 2N6027), and R12 is set to a higher value at 3K9. The details are explained in Fuzzdog's 'Repeater Build Doc'.

Alternatively, these two schematics may also provide some insight . . . . 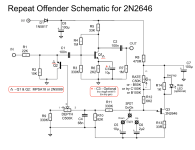 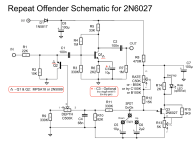 Great information, will try with a trim pot then!

Just saying that with the exact schematic by GPCBM it won't work.

I've read several articles/posts from GPCBM project builders where their stuff doesn't always work without some level of futzing with different component values in different builds. Their build doc for that project has some details buried in the content. But I'm skeptical of their results because of my experiences with the 2N6027 vs the 2N2646 devices in the Vox Repeater tremolo circuit.
You must log in or register to reply here.