The is the first build that I didn’t build to specs in the build docs.

Completed using most of the Mods found in the Chucks Boneyard thread. I probably read the comments there 20-30 times to get every part. The pictures there are invaluable, as is a couple of the build reports others have posted of their modded grand orbiters

I ended up creating a new parts/annotated list before soldering so that I wouldn’t mess it up by looking at the build docs. And it ended up being one of the first pcbs I haven’t had to desolder in a while. I guess, doing that one component at a time, triple check thing really does work better, even if it takes 3 times as long to get it done. That time is still less than my usual trouble shooting goes

All in all, it went smoothly, and was easier than expected.

I Did have to troubleshoot what ended up being lose fiber strands causing a short. Makes me want to go to solid core wire, but the last time I used that type, I got some that was too thick and brittle, and would snap on occasion, so I need to find a new solution.

I continue to experiment with alcohol inks. , To start,I taped the sides and used orange and white on a bare enclosure. Once I got it to where I wanted it, i clear coated that. Then applied a no film decal over the clear coat, following the instructions in Winter Soldier’s no film guide.

Once decal was placed, I used a sponge, and black alcohol ink to paint the sides, but it wasn’t dark enough so, I ended up using a black magic marker, to fill it in/darken the sides. And then did a clear coat over that. Then I intentionally left the bottom bare metal. I think it lends itself to a rugged, thrown together aesthetic that fits the Ricky and Morty theme.

I experimented with dipping clear knobs into alcohol ink and I like it, but I’m not sure, that I won’t end up throwing the thin black aluminum knobs that I’ve come to prefer. I’m really just trying to use up excess knobs that I typically don’t use, but could fit the pedal’s look.

I’ve really enjoyed the aesthetic that the input/output Jack screw covers provide. Not sure the additional expense is worth it. But since I have a small stash, I’ll use them while I can. 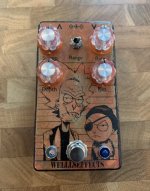 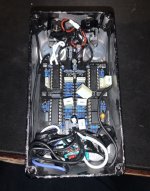 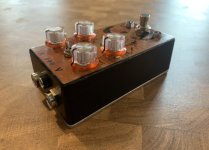 over-the-top on the graphics!

fig said:
over-the-top on the graphics!
Click to expand...