This Week on the Breadboard: BJFe Arctic White Fuzz

I've been meaning to build this one for a while. A fairly simple FF-based fuzz with the usual Bjorn Juhl magic. He uses a JFET for Q2 which requires some cleverness because with JFETs, the source voltage is higher than the gate. A big part of getting the biasing right is choosing the right JFET. I tried quite a few, including the J113 that BJ designed-in.

This schematic was lifted from FSB. At first I thought the trace had an error because the TONE control does practically nothing. When I listened to a demo, the TONE control is quite subtle. Still, I think the connection from C5 to pin 2 of the TONE pot is a trace error. More on that later.

Q1 is a high-gain, low-noise Silicon BJT. In a regular Fuzz Face, R10 would connect directly to Q1-B. But because Q2's source voltage is higher than Q2's gate, that won't work. BJ added R3 and R4 to reduce the DC voltage going to Q1-B. I think he chose 91K and 9.1K resistors because they have brown & white color bands, colors you'd find in the arctic tundra. R5 helps stabilize the bias. C2 & R6 provide some AC bypass to increase Q1's gain. C4 & R9 perform a similar function for Q2. I've seen BJ do this in other circuits, such as the Folk Fuzz and the Pink Purple Fuzz. The FUZZ control is not as simple as it looks. It mimics the effect of the guitar's Volume control. It interacts with Q1's complex input impedance. At low FUZZ settings, The balance between bass & treble is pretty even. As FUZZ is increased the tone shifts away from bass and becomes very mid-focused. Max gain is about 70dB at Q2-D, higher than your average FF.

So how does it sound? Pretty much as Bearfoot describes it in the adverts: "...purrs like a snow leopard at lower levels and attacks with full vintage growl when pushed." Noise is practically non-existent. Even with FUZZ at zero, you have to back off on the guitar Volume to play completely clean. I've only run it guitar -> AWF -> delay -> amp so far. Probably the smoothest FF I've played. It should stack well with other pedals and doesn't have to be first in the chain like most FFs. If you have a breadboard and the time, I highly recommend building this.

The TONE network is a bit odd. As drawn, it does practically nothing. So I made a little mod. It Is The Way. 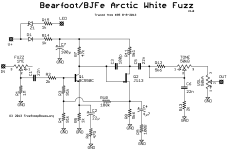 The TONE Mod
I wanted more range out of the TONE control, so I made a minor mod. I removed the wire from C5 to C6 and the TONE pot. Big difference. I ended up lowering C5 to 15nF and R12 to 3.9K (had to get that white band resistor in there). I also increased the VOL control to A100K. The modded TONE control does what the original does, but it also goes darker and brighter. C6 and R13 load down Q2's output, which not only affects the freq response but also the harmonic content at Q2-D. Breaking the connection between C5 & C6 makes the loading variable; it depends on the TONE setting. This variable loading alters the harmonic balance as TONE is rotated. It's subtle, but it's there.

My breadboard circuit looks like this. Voltages are measured with no input signal. Because R14 limits the power supply current, a shunt reverse protection diode (D1) is viable, so I did it that way. Not better, just different.

Alternate BJTs & JFETs are in the upper left corner of the board. I tried BC549C, 2N5210 & 2N5089 for Q1. They all worked equally well and each one required a different R8 to get the biasing where I wanted it. I'd say the higher the HFE, the better in this circuit. If I'd had a BC550C, I'd have tried that too. Naturally, I had to use a white LED. 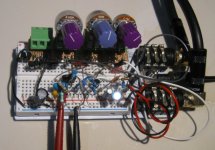 Thanks, Man. Next time that BB is apart, I'll photo the pot adapter boards. I picked up some of those 3-terminal blocks from EG when they had 'em. Stuck 'em on some leftover Vero board. The bottom side of the Vero has a double-row header. Plugs into the breadboard securely.

Your posts have pushed me into the breadboard game. I’ll have to line this up as the next one, I really enjoy your schematics.

Any issue if I used a 1N4001 in D1? The only difference I can see is Peak Inverse Voltage.

I have a ton of them, and in most circuits, they are too low-gain to be used as a common-source amplifier.

Chuck D. Bones said:
I think he chose 91K and 9.1K resistors because they have brown & white color bands, colors you'd find in the arctic tundra.
Click to expand...

Chuck has an impressive mind.

Shoot. I've been using those as substitutes because someone on another forum said they were the same tranny, different manufacturer.

"Someone on another forum" is full of

daeg said:
Chuck has an impressive mind.
Click to expand...

Not really, I just notice things. BJ picks some strange resistor values. Lot of his circuits have 14.7K when 15K will work just as well. I have some favorite resistor values based on colors, so I thought he might be doing the same thing.

The Fuzz pot is even more of an oddity when you imagine it connected to your guitar. With the Fuzz pot at max and your Guitar Volume at max, your pickups are going to get the most loaded by Q1 and the Negative Feedback path. Then as you turn the Fuzz pot down, the load is removed from your pickups, but you get all sorts of complex attenuation from the Fuzz pot, R1, Q1 and the Feedback network. Right?

Q1 presents a non-linear load to the input circuit and guitar. The higher FUZZ settings expose the guitar or whatever is driving the AWF to that non-linearity. A certain amount of distortion happens right at the input. There is a lot going on for such a simple circuit.
Last edited: Jun 6, 2022

I built a version of this a few years ago and also felt like the tone control needed more range. Should probably give this another try with your mods. Thanks for the build report!!

This is a case of the marketing making statements we have no way of verifying, or knowing if the analogy is even a good thing. "...purrs like a snow leopard..." Have you heard a snow leopard purr? I haven't. I doubt many people have, including the marketing guru. For all we know a snow leopard's purr could sound like a bit crusher.

This kind of reckless ad copy has to stop.

HamishR said:
This is a case of the marketing making statements we have no way of verifying, or knowing if the analogy is even a good thing. "...purrs like a snow leopard..." Have you heard a snow leopard purr? I haven't. I doubt many people have, including the marketing guru. For all we know a snow leopard's purr could sound like a bit crusher.

This kind of reckless ad copy has to stop.
Click to expand...

No, but I did once hold and then play with a wee lion cub. It said, “Raaa!”. Thinking back, it was a bit bit crusher-ish sounding. 🤔

HamishR said:
This kind of reckless ad copy has to stop.
Click to expand...

Right, because hyperbole has no place in advertising, especially when it comes to guitar pedals!
H

Oh you may well laugh but how many lives have been ruined by copy just like this?

I don't know either.
You must log in or register to reply here.

This Week on the Breadboard: The Voodoo Woman
2

This Week on the Breadboard: Animals Diamond Peak Overdrive (with some mods, of course)

This Week on the Breadboard: Stereo Chorus