I built this pedal to test it out for my upcoming DIY pedal building workshop. I wanted a simple fuzz with only two knobs and easy to find transistors, so I landed on this one. I also decided to try Tayda's predrilled 1590B, which are cool, but in my opinion poorly thought out: the 3PDT switch could be much lower in the enclosure, allowing to move the jacks lower too and thus providing a lot more room for the PCB. As you can see, I had to bend the pot leads to make the PCB fit on top of the jacks, which feels a bit gross! On that note, I wonder if anybody had a drill template for the Tayda drill service that could be used for this (side mounted jacks are OK with me, since it's just for a workshop). Unfortunately Tayda does not provide pre-drilled 125B with only two knobs (@PedalPCB can we do anything about that?) which would be ideal for this workshop. I just don't want to have to drill 10 enclosures myself.

Anyways, the build went pretty smoothly and honestly I rushed it a bit because I just wanted to get it done (I did forget to clean the PCB with IPA), but it all worked out right off the bat. I did notice what others have: with volume dimed, the pedal barely gets to unity. The sound is interesting but I have definitely played and own much better fuzzes than this one. I do like the green knobs and LED tho! 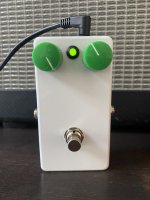 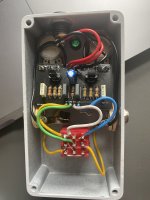 Saw that, but never used it. I’ll give it a shot.

Staff member
I need to let Hugo at Tayda know that they can offer any of the PedalPCB templates as regular options on the site if they'd like.

giovanni said:
the 3PDT switch could be much lower in the enclosure
Click to expand...

It's probably set higher to accommodate a battery. Assuming so, adding a battery clip to your build wouldn't be a bad idea. Teaches people how to use the switched power jacks.
G

PedalPCB said:
I need to let Hugo at Tayda know that they can offer any of the PedalPCB templates as regular options on the site if they'd like.
Click to expand...

That would be great!
G

spi said:
It's probably set higher to accommodate a battery. Assuming so, adding a battery clip to your build wouldn't be a bad idea. Teaches people how to use the switched power jacks.
Click to expand...

That’s a good idea. From my last experience, we barely had time to box 2 out of 6 pedals in 3hrs and it was the Amentum which is much simpler!

giovanni said:
(side mounted jacks are OK with me, since it's just for a workshop).

ARRRGHGGHHHHH!
Teach them right the first time, get the top-jacks sorted out.

I look forward to post-mortem post of your latest workshop endeavour!

The Fuzzrite is on one of my bread boards now but I haven't hooked up the volume knob. IIRC it was pretty loud wired straight to output, which means it's a great candidate for a one knob fuzz.

I have to mess with the caps however because it's unbelievably bright and thin. I increased the input cap to 100n and even 1uF and the sound got a bit fatter but I think increasing the 22nF caps should give me what I need.

FIY I play a Strat with out of phase pickups so I have next to zero bass most of the time. I like the nasal sound and I'm a bass player too so I appreciate a guitarist who confines himself to the treble and lets the big boys do the heavy lifting.