Yes they are very close to the outputs. I marked them here in orange, the caps and the IC's I get full wet sound out of. I guess I will keep probing and doing as you suggest but this is for sure needle in haystack! Some parts of probing stop me dead in my tracks, others I keep getting audio as I go along. I will try what you suggested.... somewhere in here the problem lies... I am unsure what the two grey box film caps are connected to, I have only done audio probing thus far.

Just remember that people get paid to do this tedious process. Be patient and take you time
M

Just for curiosity, have you checked for cracked/dry joints on the 4 jacks solder pads?
This is a common fault if someone has yanked a cable or stood on it.

music6000 said:
Just for curiosity, have you checked for cracked/dry joints on the 4 jacks solder pads
Click to expand...

Yes I have looked over every milimeter of the board, both sides looking for any thing obvious like cracks or any such. When i touch the top of C134 and C135 caps I get a glorious and very wet and loud and proper 700ms at 50% wet mix and it sounds NORMAL. so, up to those caps things seem OK... its now trying to wtf the rest of it... this is not easy.
M

burger-patty-and-bacon said:
Yes I have looked over every milimeter of the board, both sides looking for any thing obvious like cracks or any such. When i touch the top of C134 and C135 caps I get a glorious and very wet and loud and proper 700ms at 50% wet mix and it sounds NORMAL. so, up to those caps things seem OK... its now trying to wtf the rest of it... this is not easy.
Click to expand...

Could it be the hidden gain setting?
I suggest checking the manual and adjusting the gain to your needs. (Press & hold the manual button until 6 leds are lit.
Play at your maximum input level. Finished when nothing happens with the leds.

music6000 said:
Could it be the hidden gain setting?
I suggest checking the manual and adjusting the gain to your needs. (Press & hold the manual button until 6 leds are lit.
Play at your maximum input level. Finished when nothing happens with the leds.
Click to expand...

that is/was an excellent suggestion and recommendation but sadly that is not it. the output is about 90 to 95% too low. when i am probing and touch those 2 caps the output is proper. when not probing and jsut using the output jack (etierh L or R and wehther input L or R) the volume is just so weak and meager.

I was deep, deep googling, desperate to find a schematic. Using image search, all sorts of key words, whatever I could think of. Some of the image hits started showing the PCB that I am now familiar with after staring at it for hours. So, I came across a random post from 2012 which I am pasting below. I was getting more and more excited as I read it because this is EXACTLY what mine is doing:

Just had one in that was not working.

With the PSU the unit powers up and just responds like it should, still, no output

The input was OK; on all lines perfect sound
On the output no sound; probed and checked with an scope and the signal dissapears just before the output jack

The outputs are wired up with an opamp that is buffering, put through a 1k resistor (SMD) and through a ferrite coil then fed into the output. The signal disappeared just after the 1k resistor. Flipped the board and discovered per output 2 transistors that, when activated, pulled the signal down to ground (guess for the panning delays). Q2 and Q4 turned out to be bad and grounded the output signal.

Only markings on the transistors: XL21; no idea what kind of transistors these are. All I could get from the units on the board is that they are NPN transistors, SOT23, with an Hfe of around 600.

Replaced Q2 and Q4 with new 2SC1815 (had no SMD laying around and the 1815 fit the SOT23 layout perfectly) and now the unit functions perfect again!"

So, having truly exhausted everything I could think of, I said F it, let me find Q2 and Q4 and get at them. They are MICRO TINY SMD chips using as the guy says SOT23 package. I found them on the underside and was able to remove them using a hot iron, liquid flux and my copper braid. These things are TINY!!!!!!!!!!! Like an ant! Once I removed them, guess what. OUTPUT! ACTUAL OUTPUT! So I am heading to eBay now to buy a 20 pack of them for $1.99 with free ship and will do some micro SMD soldering to replace Q2 and Q4. I have never dealt with components this small before. Bless this dude for t-shooting and writing about it, cuz it helped me! I will update thjis once my new ones come from eBay and I solder them in to see if the pedal goes back to normal working order.

What size of ant, though? The ones trying to steal my biscuits are about a millimetre long and 1/3 as wide, whereas the bloody fire-ant that bit my foot on a Malaysian beach was nearly a centimetre long ...

Ant-size kidding aside, glad you managed to dig up that info — Meneer Duur has provided many a good schematic to the DIY community.
P

SOT23 is not bad for a first attempt at SMD soldering. You will need magnification. I say that as an older bloke, but my 12 year old with perfect eyesight also needs magnification . I use a bench magnifier with a light. You will need a fine tip on your iron. Put a blob of solder onto one of the pads on the board. Use tweezers to put the component into the correct place and melt the solder blob. Hold the component in place until the solder hardens again. make sure it truly is in the right place - when it's held with one pad only it's easy to shift if need be. Then once it is held in the right place it is easy to solder the other pads. Just don't use too much solder. Fine solder helps too. I use .7mm. Good luck

Feral Feline said:
Ant-size kidding aside, glad you managed to dig up that info — Meneer Duur has provided many a good schematic to the DIY community.
Click to expand...

You mean you know the name of Bernardduur from 2012?

PJS - Thanks for the tips. I will be doing precisely all that! I spoiled myself with a new X-Tronic iron when I started doing pedals and have a super fine tip that I use for PCB. I also have a Radio Shack mag glass/light that I have had for about 30 years which still to this day works! Amazing.

P.S. These are the SMD NPN transistors I ordered on eBay for $1.88 with free shipping, you can't even get a pack of gum for that.
I do assume these are going to be OK for the application in the Nova Delay? The size is right, it is an NPN, I'm just not sure what the difference is between these MMBT2222A or the large amount of other "NPN SOT-23" transistors that are available. MBT4401, etc. I did not look at DATASHEETS but I would assume again the answer is in the datasheet? This is all very new territory for me. 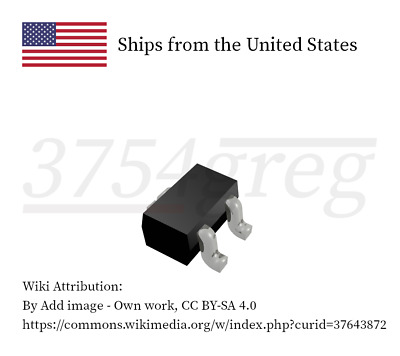 The MMBT2222A is a general purpose NPN bipolar junction transistor. This item is sold in a lot of 20.
www.ebay.com
Last edited: Aug 31, 2021

burger-patty-and-bacon said:
You mean you know the name of Bernardduur from 2012?
Click to expand...

Ja, Ik weet his naam heel well — I've got a lot of his schematics on my computer.
I don't know him personally or anything, and he's been doing this DIY thing a LOT longer than I have.


An aside: I believe Bernard's surname is "D'Uur" — the prefix "De" as in De Kuiper is shortened to the "D'" since a vowel follows it. A direct literal translation would be "The Hour".