Okay, thanks. I remembered that the output impedence is affected by the input of the next pedal in the chain.

I'm not sure if we are talking already about nuances of the sound most people probably don't concern, but I will make an audioprobe to exclude other issues!
Thanks for taking your time and I will promise to stop bothering you after this very last question:
What does the Mod 2a do with the input stage and why did EQD build it so strangely compared to input stages of most other pedals?

Don't know about the mod, but you'd have to ask EQD about why an EQD pedal was built so strangely.

Feral Feline said:
Don't know about the mod, but you'd have to ask EQD about why an EQD pedal was built so strangely.
Click to expand...

Only Chuck can tell why he changed the values of the input buffer. I don't want to risk soldering too much on the board, so that is why I want to know

I changed those parts to inject a measure of sanity into the design. EQD's Jamie Stillman readily admits that he's no engineer. He fiddles parts until he's satisfied with the sound. Good enough for him. Not good enough for me. The component values I specify in mod 2a result in an input impedance >1MΩ and a low freq cutoff <1Hz. Either set of component values will sound the same.

Feral, I think this thread has run its course and then some. If you want to continue the discussion on input and output impedance, let's start a new thread in the Boneyard.

Wow, I feel like someone should tell the guy at EQD his product could be greatly improved by implementing Chuck's major flaw mod #1.

One of many perks to the DIY community: you can build *better* than commercially available products. Love it dude.

Anyway, here's how I did the mod on the top of the board if anyone is interested … 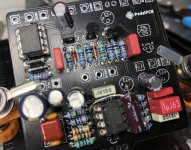 And yeah, there's a shit ton of flux in that area because I tried to tack it into place *after* R5 was already soldered in.
When that didn't work, I took out R5 and reinstalled a new one so I'd have more room.
Last edited: Sep 25, 2021

Nice job!
Be sure to clean that excess flux off, it might cause problems later.
Question: why did you not buy the Boneyard Edition and save yourself the trouble?

Thank you, thank you!


Chuck D. Bones said:
Be sure to clean that excess flux off, it might cause problems later.
Click to expand...

I'll heed your advice. Olderheads in the scene always advised not to worry about the flux. Since you know what you're talking about, I'll wedge a q*tip in there with some isopropyl alcohol. Or else I'll wait till it hardens and scratch it out. I don't want it to haunt me down the road!


Chuck D. Bones said:
Question: why did you not buy the Boneyard Edition and save yourself the trouble?
Click to expand...

I bought it before I saw this thread. A friend asked me to build him a compressor. I asked ‘which compressor do you want?’ And he sent me a link directly to the Inferior Edition™. Since I wanted a compressor for myself, I bought 2. Ha. So I get to do the mod twice.

Definite advice to anyone thinking about building a Delegate: get the Boneyard Edition. No question. Hopefully, the BY edition is outselling the regular by 10:1.

This was my first purchase from PedalPCB. Before that, I only used Madbean and self-etched pedals. Glad my guitarist friend linked me. My PedalPCB builds are more successful and better sounding than my self-etched experiments.

I loaded up the cart to get free shipping.

Right now, on the Warden, the LED is not lighting up at all. So I'll have to check the schematic and troubleshoot. Or maybe try a brighter LED. I'm using a 3mm LED of unknown origin. I'm hoping it's just a super dim one or something.

The volume and tone knobs are working. It's just not compressing. … yet!

The LED could be bad or in backwards. You wouldn't be the first person to install an LED backwards. Hint: The LDR sees everything. If you want to test this with the board exposed, the room has to be very, very dark. A bad connection with the ATTACK or RELEASE pots would also prefent the LED from lighting.

Chuck D. Bones said:
The LED could be bad or in backwards. You wouldn't be the first person to install an LED backwards. Hint: The LDR sees everything. If you want to test this with the board exposed, the room has to be very, very dark. A bad connection with the ATTACK or RELEASE pots would also prevent the LED from lighting.
Click to expand...

The LDR is picking up room light. I move my desk lamp and I can hear the volume change. Now I'm at risk of derailing this thread which should stick to Boneyard mods. But at the same time, my build isn't worth starting a new thread; I'm having no trouble yet. I expected to swap LEDs at least 3x. I remember you recommended a 3mm, less bright LED so that's what I started with. Also, the LED / LDR combinations might be interesting to anyone deep into this build. So I'll make this my last post in this thread, and ask forgiveness later.

Measuring DC across the LED, I can get it to about 1v when I strum hard. That's not enough to generate visible light with this particular LED.
Why is this interesting? Because I'm using a passive guitar directly into the Delegate.
Folks with a hot signal, compressing at the end of their chain, might want to stick with a dim LED.
Compressing at beginning of chain? Maybe some folks will want a brighter LED. It's a quandary bc the compressor will bring up the noise floor at the end of the chain.

Dig this. No changes since my last post. But if I BOOST tf out of the signal with a SuperHardOn, I get visible light.
Onward with LED experimenting!
Updates. Keeping them confined to this post:
The next LED I tried was a 5mm white LED: LTW-2R3D7. (In combination with a GL5516 LDR.)
Mouser page says it's 2000mcd (but also lists it as 4200mcd on the same page which is confusing.) I also have ones listed at 8200mcd which I'm not gonna use.

The compressor can now be activated with a passive guitar and no booster. It seems to be working well so I'm going to stick with it for now, but I wish I had a dimmer one (actually 2000mcd) to try. This one's bright enough to leave phosphenes after you look at it for a while.

I did Chuck's:
Fixing the tone knob is major. Don't skip that one. It's easy to do.

—EDIT— "Significant problem" fixed by testing in a dark room as originally instructed.

As previously mentioned, save yourself the trouble at get the Boneyard Edition PCB at the outset.
That's a wrap. Thanks Chuck!
Last edited: Jan 16, 2022
G

Just to double check - if im using the boneyard edition of the pcb, all mods are included in that, so its just a straight forward build as per the listed pcb components ?

Grent5000 said:
Just to double check - if im using the boneyard edition of the pcb, all mods are included in that, so its just a straight forward build as per the listed pcb components ?
Click to expand...

Pretty sure that's correct, but I'm sure @Chuck D. Bones will confirm shortly

I may have missed something, but why are the caps C7 and C8 in Delegate-Boneyard 220n instead of 22n?

Good question. I don't know. I just checked my pix and they are 22nF in my build. 220nF may work fine, but they seem to be overkill.

Is anyone else having trouble with the ratio knob (over 50%) killing the visible light from the LED?

Everything's working great until you turn that ratio knob up. Do I just need a brighter LED? Any ideas where I should look?

I'm wondering if lowering the input resistor at R2 would let more signal into the box? Or would that cause problems?
Maybe my transistors are too low gain?

I've actually tried 5 different LEDs. Even my brightest LED only lights up with power chords and a humbucker. It's pretty dim when playing on just the B and high-E strings.
Last edited: Jan 16, 2022

Turning the RATIO knob clockwise makes the AGC (automatic gain control) loop more sensitive to LDR resistance. You may have trouble seeing the light coming out of the LED, but the LDR is seeing it. That LED is not for your eyes, it's for the LDR. A brighter LED would not be any more visible because the AGC loop will dim the LED down until the LDR resistance is appropriate.

Reducing R2 will have no effect.

Changing R4 won't make the LED any brighter either, but you found that out already.

Here's a silly question: are you testing this in total darkness? Any stray light will make the LDR resistance go down and the circuit will react by lowering the LED current.

Chuck D. Bones said:
Here's a silly question: are you testing this in total darkness? Any stray light will make the LDR resistance go down and the circuit will react by lowering the LED current.
Click to expand...

If I were smarter, that might be a silly question. But no, I'm a dumbfuck and I'm doing this in a lit room.

I even remember reading on page 2 of this very thread to test it in the dark but somehow I forgot. Oh well, maybe this will help remind people that light in the room is like turning a knob against you.

You're the best, Chuck. You deserve a medal for dealing with people like me.


Chuck D. Bones said:
Changing R4 won't make the LED any brighter either, but you found that out already.
Click to expand...

Yep, switched it to 22k. No effect. Switched it immediately back to 10k.

I've had a fully working compressor this whole time!! I just didn't know it.
I just needed to put the lid on.

In a room with no light but the pilot light from my Sovtek Midget, I discover this compressor works, and it sounds amazing. What a relief. Thanks again Chuck. 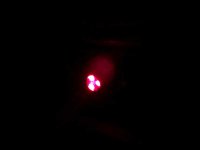