What's All This Stuff About Germanium Diode Leakage?

Like Germanium transistors, Germanium diodes are leaky. They behave like they have a resistor in parallel and in many cases, that resistor is less than 50K. The higher the leakage, the lower the resistance. Two questions that keep popping up are:
How much leakage is too much?
How do we measure leakage?

The answer to the first question is pretty simple: it depends on the circuit. If that leakage resistance is larger than all of the resistors that connect to the diode in the circuit, then those diodes are probably ok. If the Ge diodes are being used in a low impedance circuit, such as a hard clipper, then we can tolerate a lot of leakage because the circuit resistance is smaller. If the Ge diodes are used as soft clippers in a BMP circuit, such as the Cornish N-2, then they need to be very low leakage because they are in parallel with a 470K resistor.

The answer to the second question is pretty simple too because we can measure either the leakage current or leakage resistance with a DMM.

Let's look at a diode V-I curve. The scales on this plot are distorted to highlight what's going on in both the forward biased and reverse biased regions. In reality, there is no kink in the curve as it passes thru zero. For this discussion, we'll focus on the blue region. 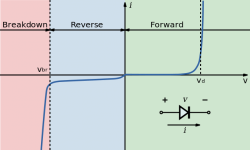 At the low voltages and currents we see in pedal circuits, the relationship between diode voltage and current can be described by Equation 1:

Where Id is the diode current, Is is a scale factor called saturation current, Vd is the diode voltage, n is a "shape constant" that is between 1 and 2, usually closer to 2, Vt is the thermal voltage which is 26mV at 27°C. For this discussion, we'll let n = 2.

When Vd is a negative value much larger than nVt, then Id = Is. In other words, the leakage current is approximately equal to Is.

The slope of the curve at any given point is the diode conductance. Conductance is the reciprocal of resistance. With a little calculus, we can get the diode resistance at any point on the curve (Equation 2):

We're interested in the diode resistance near zero volts. When Vd = 0,

and since Is is pretty close to Ilkg, the diode resistance is:

As we increase the reverse voltage on the diode, Rd gets larger, but if the leakage is too large then we can never develop enough reverse voltage in the first place. Let's look at a practical example, the Cornish N-2. The distortion stages are basically a Big Muff with Ge clipping diodes. Here's an LTSpice model of the N-2 without the buffers. The 1N34A diodes in the LTSpice library have Is = 1.2uA, which gives us an equivalent resistance of 43K for one diode. The red trace is the current in D6, one of the clippers in the 3rd stage. The green trace is the current in R34, the feedback resistor in the 3rd stage. Notice that the diode current goes almost 2uA negative. If this was a silicon diode, the reverse current would be a few nA. As it is, D6's reverse current is huge compared to the signal current in feedback resistor R34. D5 and D6 have effectively paralleled R34 with two 43K resistors, killing the gain of that stage. The same thing happens with the 2nd stage. Using typical 1N34A diodes, we're lucky if we get much more than unit gain from the distortion stages. 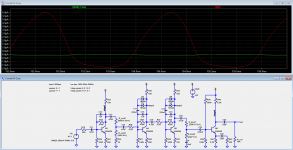 Now suppose we replace those generic 1N34A diodes with Ge diodes that have been selected for low leakage. In this next sim, I've replace all four Ge diodes with low leakage diodes that have a leakage resistance of 1Meg. Note: the 1N34B diode is not in the LTSpice library, I made it by copying a 1N34A and then setting the Is parameter to 52nA. Notice two things: The minimum D6 current is now very close to 0uA. The maximum D6 current is now 28uA compared to 6uA on the previous chart. The max current went up because D5 is not leaking current on the other 1/2 cycle. The gain is much higher, but is still not as high as it would be if the diodes were 1N4148s because their leakage current is a few nA.

Resistance Method
DMMs measures resistance by applying a precise constant current and measuring the voltage drop. Modern meters keep the voltage drop low, well under 1V to protect semiconductors if we try to measure their resistance. My Fluke 115 applies 100nA when it's in the 6Meg range. A 1Meg resistor has 100mV across it during the measurement. If I use the Fluke to measure the input resistance of my Extech 411, I get a reading of 9.98Meg on the Fluke and 496mV on the Extech. Therefore, the Fluke is applying 50nA when it's on the 60Meg range. This means that when we're trying to measure reverse leakage of a diode, the DMM applies some current, measures voltage and converts that measurement to resistance. If the reading is too high or too low, the autoranging feature kicks in and switches the DMM to another range. This works fine for resistors but usually goes haywire when measuring non-linear devices like diodes. We will have you use manual ranging.

When I measure the leakage resistance of a GD012 Ge diode, the reverse voltage is 8.3mV (measured by the Extech) and the resistance reading is 83K. This tells us that the Fluke is applying 100nA because 8.3mV / 83K = 100nA. The only two ranges on the Fluke that give a reading are the 6Meg and 60Meg ranges and they more-or-less agree.

Conclusions
We can measure diode leakage and resistance using either of the two methods described above and get roughly the same result.

Leaky diodes will kill the gain in a BMP circuit; we have to select Ge diodes for maximum off resistance. With soft clippers, the diode resistance must be much larger than the feedback resistor (typically 470K in the BMP).
Last edited: Jun 29, 2021

Dude, excellent and just in time as I have received a bunch of Russian D9K diodes after being more than 3 months on the way...
Thanks so much!

Let me know if you find any low-leakage Russian diodes. All of the ones I have tested leak like a sieve.

Chuck D. Bones said:
Let me know if you find any low-leakage Russian diodes. All of the ones I have tested leak like a sieve.
Click to expand...

Here's the test data I have so far. I used the Leakage Current method described above. Is is the saturation current, which is the same as the leakage current measured with -9V across the diode. Rd0 is the calculated diode resistance at zero diode voltage. That Tayda 1N270 was extremely leaky. I pulled another one out of the bag and it's leakage was over 70uA .

tested 4 stock standard 1N4148 just to compare how the tester worked on those, they all tested around
Uf 730mV Ir 3nA

Fascinating stuff. I'll measure a load of mine tonight and post some results

Ok @Chuck D. Bones I've been going through and uave measured the resistance of a load of my diodes but I'll be honest and say you lost me with the current method. Can you dumb it down a bit for me?

Now I'm wondering if my DMM is borked. It's a pretty cheap one a proster vc97. While I'm measuring the resistance of my diodes the figure is climbing with some diodes and falling with others e.g a green band 1n34a I've just measured started at 353k and within 20 seconds was over 380k and still climbing. Some weird ones I got from tayda were the exact opposite starting at 548k and dropping down continuously. Anyone have any idea why this would be? The only ones which seem to be vaguely constant are some of the russian ones which barely register at all - which going by what you posted above means they're leaking like a sieve

One word: Temperature.
Leakage, particularly in Germanium, is extremely temperature-sensitive. When I test Ge parts, I have to let them sit, connected to the test rig, for at least a minute before the leakage reading settles down. Also, make sure no direct sunlight is hitting the diode under test because all semiconductors are photo-sensitive and the diode bodies are mostly clear glass.

SillyOctpuss said:
Ok @Chuck D. Bones I've been going through and uave measured the resistance of a load of my diodes but I'll be honest and say you lost me with the current method. Can you dumb it down a bit for me?
Click to expand...

Do you have a breadboard?

Chuck D. Bones said:
One word: Temperature.
Leakage, particularly in Germanium, is extremely temperature-sensitive. When I test Ge parts, I have to let them sit, connected to the test rig, for at least a minute before the leakage reading settles down. Also, make sure no direct sunlight is hitting the diode under test because all semiconductors are photo-sensitive and the diode bodies are mostly clear glass.
Click to expand...

Of course that makes sense

Chuck D. Bones said:
Do you have a breadboard?
Click to expand...

Yes that's what I was going to use

First you need a 1/2-way decent DMM. It has to have a 200mV range (or something like that) and it has to have 10M input resistance.

Chuck D. Bones said:
First you need a 1/2-way decent DMM. It has to have a 200mV range (or something like that) and it has to have 10M input resistance.

Thanks Chuck that's what I was doing. It was not letting the reading settle (I'm used to it being pretty quick for resistance and forward voltage). Also I couldn't understand how you were getting from mV to KOhms but I get it now. I'll have another go tomorrow night and post some results. Thanks for your help.

You really need to be patient when measuring Germanium. A little bit of heat from your fingers throws stuff way off.
Z

Is it odd that some of the 1N270 diodes I ordered from Tayda measure between 1.5 and 2.1 volts using this method? I have other 1N270 diodes from Tayda that are physically a bit smaller that measure in the lower mv range.

The Tayda 1N270s I have are glass with two black bands at the cathode end. They are very leaky, about 10.5μA. Yours are leaking 15μA to 21μA.

I was keeping my fingers off of the diodes when I was testing but I can check. Both batches are glass. The larger ones with the higher readings have 2 black bands, and the smaller ones only have 1 black band. The smaller ones look like the Tayda 1N34A diodes that I have. Maybe I sorted them wrong initially.
You must log in or register to reply here.

What About Darlington Germanium Transistors?