Here's one from NC for you @jubal, taken this afternoon.

Yeah, I'm actually kinda bummed I'm missing the cicadas this time around. My dog would have a blast running around eating them like popcorn.
Or is that a moth?
Which part of the state are you in?


I took a pic here of its Asian cousin, Macroglossum insipida, the Hermit Hummingbird Hawkmoth. Alas it was evening and the low light left the moth just a blur amongst the flowers on my old phone-camera. So instead, here's a pic taken moments later — a beautiful evening walk with my wife. 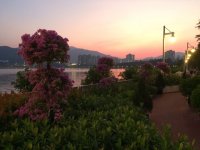 Hmmph looks darker here than on my c'puter.
Like many people who see them, I thought it was a hummingbird, until I got home and searched out what it was exactly. A rare sighting.

Sorry Jubal, I missed the first question! @Feral Feline is 100%.

BBQ rib dinner! Ribs from the smoker, mandarins from the backyard, home-made BBQ sauce & a baguette from the local bakery. Rootbeer fortified with some dark rum to wash it all down. Alcohol is a good degreaser, don't ya know. 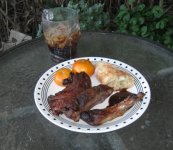 jubal81 said:
Nah. Had a girlfriend who lived in Falls Church when we met, so I spent a good amount of time in the DMV. Guess that was about 16 years ago now. I'm from N.C., but moved out to the PNW 5 years ago. I like it, but I sure miss the food. Nothing out here is right.
Click to expand...

Killin' me with those ribs, Chuck. What kinda rub did you use?

Dang those ribs... Had me with the pic, but no joke my mouth is filling with saliva at Balsamic Soy Chili brown-sugar...


One of those "master-class" ads keeps popping up, a new one. I rarely if ever watch the adverts, but this one's by a guy who teaches how to barbeque brisket — I watch through it every time.

Meet Layne. 5 years ago to present. Best bud in the whole world.

Feral Feline said:
Dang those ribs... Had me with the pic, but no joke my mouth is filling with saliva at Balsamic Soy Chili brown-sugar...


One of those "master-class" ads keeps popping up, a new one. I rarely if ever watch the adverts, but this one's by a guy who teaches how to barbeque brisket — I watch through it every time.
Click to expand...

That's most likely the King of Brisket Aaron Franklin 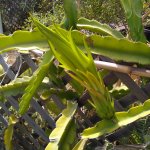 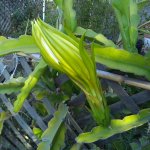 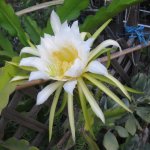 It will be open all night.

It will be open all night.
Click to expand...

Now I want some Dragon Fruit and Brisket...

Tiny orchid flower. The flower petals are about 1/2" long. 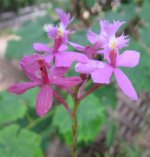 They only come out at night. 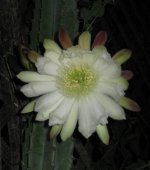 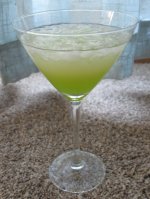 This is one of mine. It was shot in Lucky Bay, on the Southern Ocean at the bottom of Western Australia almost 20 years ago. I'm cheating though because I'm a professional photographer and this was photographed for south-west tourism. This shot has been used on billboards and magazine ads ever since - I still see it from time to time. It predates my conversion to digital photography - it was shot on medium format colour transparency.

Lucky Bay has the whitest sand I have ever seen. It doesn't show in the photo but the water was so clear that I could see the shadows of the waves on the sea floor. And the sand was so fine it packs down hard enough to drive a regular car on. The kangaroos do actually lie on the beach in the early mornings, warming up and licking the fresh water which trickles over the sand from the dunes. It's an incredible beach - probably because it is over a day's drive from Perth.
Click to expand...

All these pics are beautiful, especially this one shot on color transparency film. I really miss Kodachrome 25. For me, that was the best film ever. So beautiful!
You must log in or register to reply here.

Saturday at 7:40 AM
Feral Feline