This Week on the Breadboard: A Digital Reverb

I picked up a Belton BTDR-3H from StompBoxParts recently with the idea that I would experiment with it. This breadboard is the result. It's not a mod to any existing design, although it has roots in the VFE Springboard and the EQD Levitation. The Belton reverb brick is a clever design containing three PT2399 delay chips, with feedback arranged to simulated the multiple reflections in a spring reverb. The delay of one of the PT2399s is varied slightly at about a 1Hz rate to give the reverb effect more life and make it sound less sterile. The variable delay creates a sort of chorus effect as well. Some people find the cyclic delay variation to be excessive. I'm one of those people.

U1A is a unity-gain input buffer. PT2399s can be a bit noisy, so I added treble pre-emphasis ahead of the brick and de-emphasis after. Spring reverbs typically have a bass-cut ahead of the reverb pan, which itself is a form of treble pre-emphasis. C2 performs that function here. The BODY pot (VR1) and C3 provide variable bypass around C2, adding some of all of the bass back in. The BODY control is more-or-less copied from the Levitation's TONE control, however the BODY control in this circuit has a much wider control range. U2A works with C2 to provide treble pre-emphasis, it mixes in the AMBIENCE feedback and provides extra gain to improve the overall signal/noise ratio. The two DECAY controls are copied from the Springboard. The LO-DECAY varies the decay of channel 1, the darker of the two delay channels. The HI-DECAY varies the decay of channel 2, the brighter of the two delay channels. The difference is subtle. The AMBIENCE control extends the decay of the treble content, adding some extra shimmer to the reverb. It was copied from the Levitation, however in this circuit it goes right up to the edge of self-oscillation. U2B amplifies the brick's output and performs the treble de-emphasis. The Springboard has Baxandall BASS & TREBLE controls after the brick, which I felt was a bit much. Instead, I opted for a BMP-style TONE control. The TONE control is flat at noon. It can be used to restore some of the bass lost before the brick or add brightness. The REVERB control varies the amount of wet signal fed to the mixer, U1B. The wet and dry mix is about equal around 3 or 4 (10:00 to 11:00). With REVERB at 10, the wet signal almost completely overwhelms the dry signal. U1B inverts the dry signal, which in my mind is no big deal since there is no reason to wrap an external blend control around this circuit. U4 provides regulated +5V to power the brick. Because the gains are low and the TL072 has good DC precision, I was able to DC-couple everything except the AMBIENCE control, saving quite a few 1uF coupling caps compared to the Levitation. The brick is AC-coupled internally at its input and output. Of course, the pedal's input and output have to be AC-coupled since the opamps are all biased to Vref.

I'm satisfied that this circuit does what I intended it to do. There might be some small component value tweaks. Does it sound as good as a real spring reverb? Nope. Is it useful as a guitar effect? I think so.

There are designs out there for digital reverbs using 2, 3 or 4 discrete PT2399s. The T60 by Brian Thorn is a good example. It corrects some of the Belton brick's shortcomings, particularly the delay modulation. There's no free lunch; doing it that way takes up a lot more board space than a Belton brick. 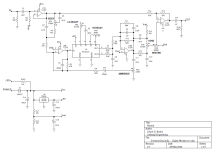 All blue busses are ground except the very top one which is unused.
The bottom red is +5V on the left half, +9V on the right. On this proto-board, the busses are broken in the middle. I have jumpers on all of them joining the two halves except the bottom red bus.
The next higher red bus is Vref. The one above that is +9V. The top red bus is not used.
The signal flows pretty much from right to left. U1 is at the far right. U2 is near the middle. U4, the 5V reg, is left and below U2. 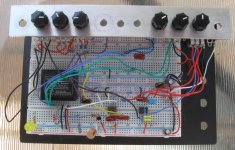 What are the “cw” designations on the floating pins of the LO/HI DECAY pots? TIA

fig said:
What are the “cw” designations on the floating pins of the LO/HI DECAY pots? TIA
Click to expand...

You are correct, sir! I'm surprised no one has asked me this before.

I'm also one who dislikes the cyclical modulation. I think the correct way to de-sterilize the effect would be to modulate that chip with a dynamic envelope instead of an lfo.

Thorn's approach is to use two LFOs at slightly different freqs modulating two of the four PT2399s. He makes the modulation much lighter.
Last edited: Jun 2, 2022

Looks like JLCpcb has PT2399 available in their SMD parts library. It wouldn't be that much of a stretch or expense to have custom 'reverb bricks' manufactured.

Will have to be 100% SMD with parts on both sides to get that small of a footprint. Might necessitate a 4-layer board as well. An external modulation pin would be the ticket.

Can't we just simply have another overdrive design instead....?!?

Sorry couldn't help myself.....
Great stuff, super thorough again! Salivating are we, @jjjimi84 ...?
Thanks so much for nutting this out! Is it fork ready or better wait for value tweaks?

The idea of a smd board with discrete PT2399 sounds enticing, as a plug in board with pin headers like a ungooped improved brick thing?!

This Reverb is as good as done. The only thing we might want to think about is moving some of the pots inside for the benefit of those who are easily confused by more than three knobs.

As for a Brick of Our Own™, I'm studying the T60 now to see what we might like to change. The LFOs are clunky and could be simplified, augmented or replaced with an alternative modulation method.

cooder said:
Can't we just simply have another overdrive design instead....?!?

Sorry couldn't help myself.....
Great stuff, super thorough again! Salivating are we, @jjjimi84 ...?
Thanks so much for nutting this out! Is it fork ready or better wait for value tweaks?

The idea of a smd board with discrete PT2399 sounds enticing, as a plug in board with pin headers like a ungooped improved brick thing?!
Click to expand...

Well this is awesome! I like the idea of the hi and low as trimpots, if they are subtle then that is a more set and forget kind of thing.

I agree, the two DECAY controls could be trimpots. I think B-taper will be ok. The BODY & TONE controls could also be trimpots. BODY will have to be more like 100K if it's going to be B-taper. If you're going to use the AMBIENCE function, then you'll need either the pot or an ON/OFF switch on the front panel.

Could we use one TL074 instead of two TL072 in there or would there be potential issues?

A quad opamp is fine, the gains are low so there should not be any issues with crosstalk.
D

Do you have any pictures of of the inside or the Accutronics Belton BTDR-3H ? Do you know the difference between the 2 and this 3 model?

Nope. I can make some educated guesses as to what's different. Suggest you scour the 'net like I did, maybe you'll get lucky & find something I missed.

Where do I get in line for the pre-advance-reserve order of a BOOO™ and a Whiteout?

I haven't breadboarded the AWF yet. YouTube Demos & simulation look promising.
You must log in or register to reply here.

This Week on the Breadboard: A Stereo Digital Reverb

This Week on the Breadboard: a BBD Reverb
2

This Week on the Breadboard: Stereo Chorus

This Week on the Breadboard: Boss OD-3